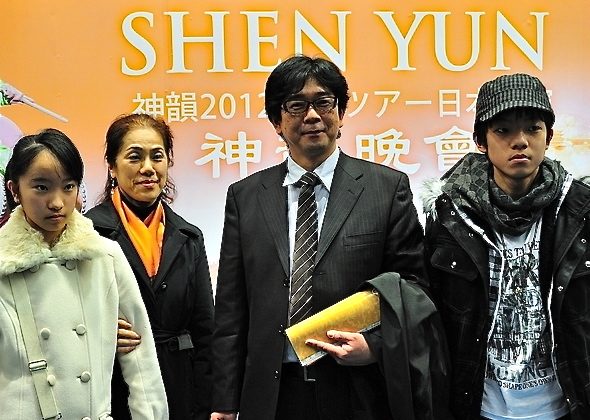 HIROSHIMA, Japan—Shen Yun Performing Arts New York Company arrived in Hiroshima on Feb. 19 and held performances in the city’s Cultural Exchange Hall. The theater was packed with an audience who enjoyed the authentic and pure traditional Chinese culture, a show they would never forget.

Mr. Kenji Morikawa runs a ballet dance classroom. He came to Shen Yun with his family for the first time. After the performance, Mr. Morikawa said that the show was absolutely dazzling. “It’s more than words can say. I feel honored to be able to enjoy such supreme orthodox Chinese art. Shen Yun amply demonstrated the spirit of the traditional Chinese culture-respecting heaven and gods. I personally love it.

“The show expressed gods’ grace for mankind through art and showed how respecting heaven and gods can bring glorious future to mankind.”

“I have seen many other Chinese dance shows and they were crude and somehow vulgar. Shen Yun’s classical Chinese dances were graceful, elegant, and original. The show completely erased any bad impression I had about Chinese dance. The artists’ danced with superb skills and the meaning behind the stories was far and deep. This is not seen in ordinary performances,” said Mr. Morikawa.

Ms. Yoshiko Tanaka, who is an art lover, came to watch Shen Yun based on a friend’s recommendation. “Wow, it was surprisingly wonderful,” she said.

Ms. Tanaka frequents art exhibits. She was extremely impressed by Shen Yun and this would be what she would say to bring her friends to the show: “I cannot find the proper words to describe how great it is. You can learn a lot from it. Let’s go watch it together.”

“Every performer was very professional. The male dancers’ masculinity impressed me greatly.

Choosing one dance to remark on, she said, “I really enjoyed Joyful Little Monks, which is really funny.”

Ms. Tanaka said she also learned a lot from the dance ‘The Dafa Practitioner’s Magical Encounter,’

“Not all news from inside China can reach Japan. I have never heard of the persecution of spiritual groups there. Now I really should think about this.”

Shen Yun also includes bel canto style solo vocalists, something Ms. Tanaka really enjoyed. She said: “They were really great. I sat towards the front and could watch them very closely. Their voices were powerful. The lyrics had a lot of meanings. I felt that the Buddhas and gods were speaking to me via their voices. I will never forget the message.”

Ms. Tanaka was also excited about the animated backdrop. “It was as if real people came out of the backdrop. It’s already so much better than regular shows. The backdrop made it even better,” she said.

Ms. Tanaka mentioned that her mother is learning Chinese and that she would bring her along next time.