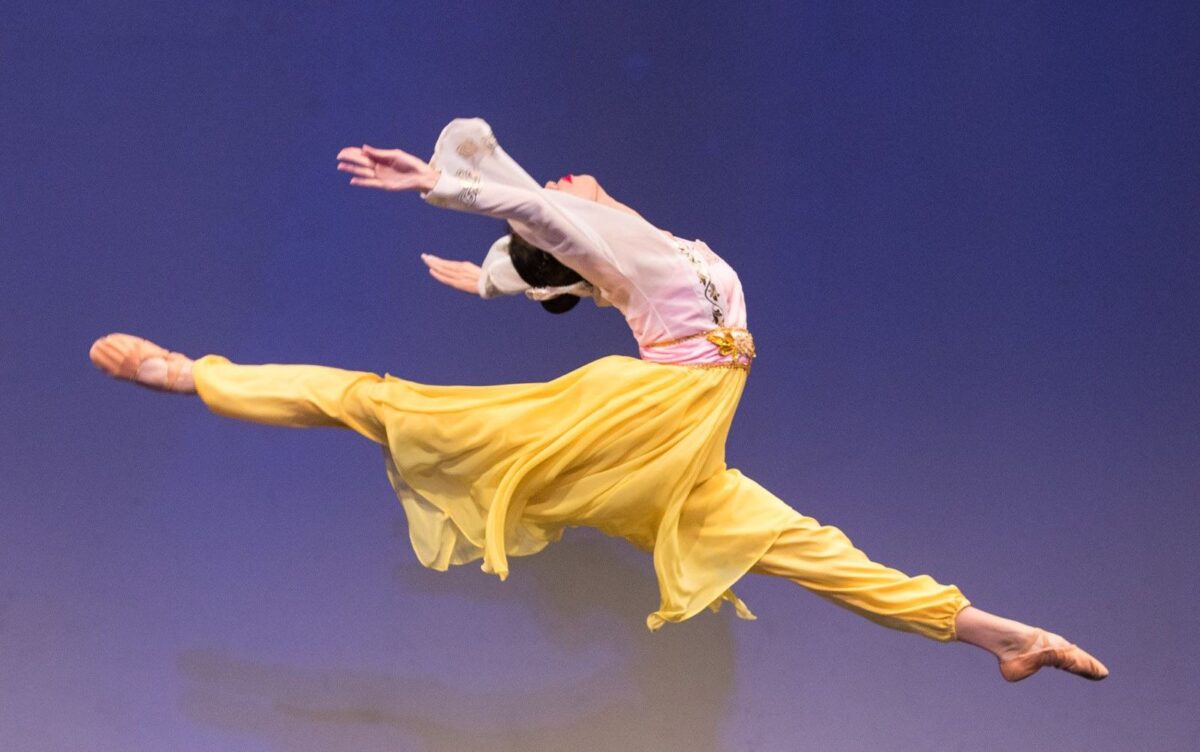 Eventually, Lian focused all her time and energy on developing fully in classical Chinese dance, perfecting the moves and pursuing refinement of the art in her career, all while retaining the joy of it.

But gradually, day by day, she started to glimpse something behind each movement she performed. “The more I dance, the more I discover that there was deeper meaning inside,” Lian said in an interview. She’s been a dancer in practicum with Shen Yun Performing Arts since 2014.

This premier classical Chinese dance company, based in New York, has in the past dozen years been responsible for the revitalization of this art form and thus the traditional culture it embodies. Formed in the very foundation of this ancient system of dance, in every movement and gesture, is something that Lian gradually realized is worth treasuring:

“It’s a very vast, very grand thing. It’s very deep. Once you know a move, it’s not just about how you do it, not just how your hand goes this way and your foot goes that way, and you position your head there. It’s not just like that. It’s a much more holistic thing.”

When people see Shen Yun dancers on stage, sometimes all in perfect unison while still in motion, the precision of that hand gesture, that placement of the foot, and the position of the head is impressive. But what sticks with audiences is what they often describe as an indescribable, but uplifting, feeling.

On stage, together with the dancers she so admired, “it’s very magical,” Lian said. Not just the movements but also the energy of the group has to be in sync to achieve that effect.

Back when Lian was only a member of the audience, her only reaction was to marvel at how beautiful the dances were. Now that she knows these artists personally—as individuals, professionals, and friends—she sees their performances in a different light.

“It’s actually even more touching, at times, because you know how hard they’ve worked,” she said. “After you know their difficulties, their happiness, the things they go through to achieve something like that, and they present something that is very pure and righteous, it’s quite touching. You know how hard it is to achieve that.”

Her fellow dancers in the company have been great artists and mentors not just in dance but also in life, Lian added, because of the holistic view they have of their craft.

For instance, Lian explained, what she tries to bring to the audience is something “clean and bright and positive.”

“And it helps when you don’t think too much about yourself. While dancing, you need to expand your heart,” she said. It helps to practice that magnanimity of spirit in everyday life, too.

A Shen Yun Dancer: A Vessel for Art

Classical Chinese dance is famously expressive, and Shen Yun’s dances always include several storytelling pieces. So as a dancer, Lian had to learn to act.

“I did ‘The Butterfly Lovers,’ and it was quite interesting because in that piece, I have to be a girl and pretend to be a guy at the same time—in one piece,” she said. It was quite the challenge for her first dramatic role. “If I had to do it again, I’ll probably do it a little differently this time,” she said with a laugh.

“[With acting], you have to adjust your emotions … in order to be realistic you need to layer emotions, and you need to adjust the proportions to make something better,” Lian said. Dancers of this caliber work on perfecting what the average dancer wouldn’t even realize is within their control—like the tone of an interaction with another dancer, or the whole atmosphere of the stage.

To do this, Lian seeks a pure state of mind.

“It’s always easier to absorb and present when the canvas is cleaner,” she said. Classical Chinese dance is about the feelings behind each movement, Lian stressed, and to convey that bright, clean, and pure energy to the audience, she has to possess it herself. It seems that ego would only get in the way. It’s worth noting that Shen Yun translates into something like “the beauty of divine beings dancing,” and audiences tend to find it apt. “Whether you’re portraying a positive character or a negative character, it’s always easier when you don’t have too much of your ‘self,'” she said.