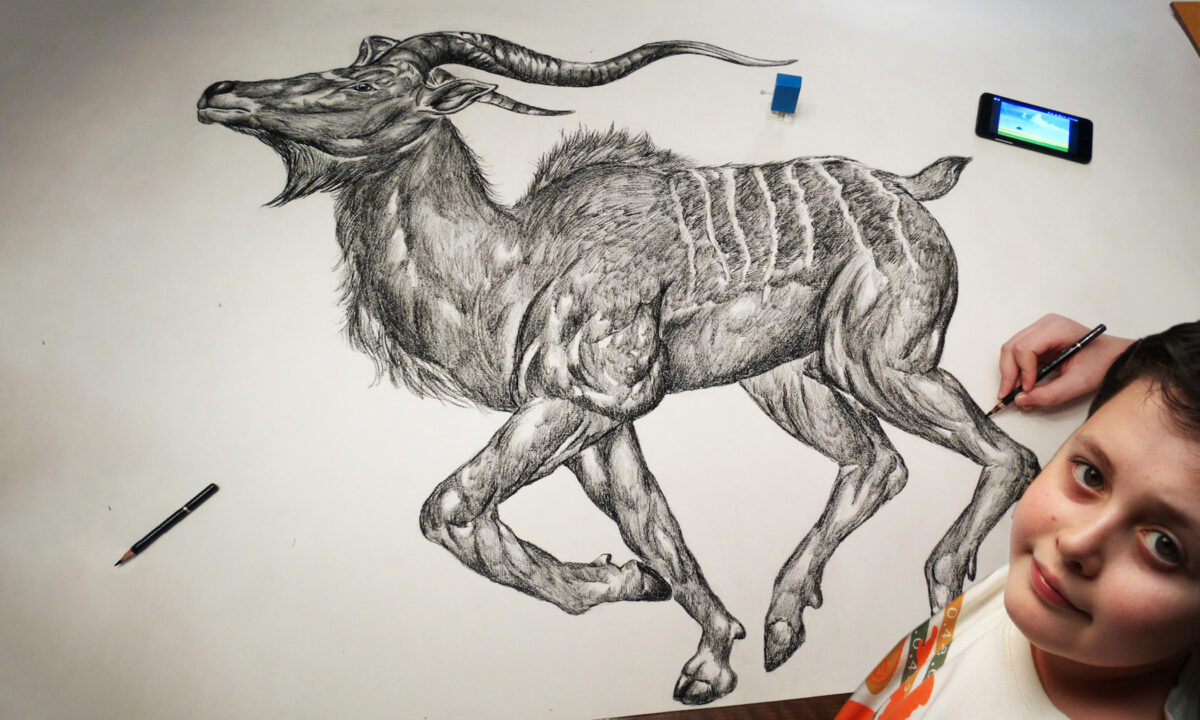 “I always loved nature and my interests were connected with it. I believe that people who love nature also must love art.”

Serbian artist prodigy Dušan Krtolica, now 19, shared this to The Epoch Times, speaking of his lifelong passion—one that has made him world-famous since childhood: drawing his amazingly realistic animals.

Dušan began drawing when he was just 2 years old, as he shared: “At first, I was drawing some unrecognizable shapes; later, those shapes started to resemble animals.” The young artist, from Belgrade, doesn’t remember the first animal he drew; his parents say it was a whale. As his works increased in detail, so did his fame increase, with some hailing him as the next Albrecht Dürer.

“When I was younger, I spent my whole days drawing because it was a game for me,” Dušan said. “I would often draw just a few lines and then start working on something else. I would use up whole packages of paper—around 400 pieces of paper—that my parents were buying me, weekly.”

Not only are Dušan’s creatures incredibly detailed, but they’re remarkably correct anatomically for such a young artist. “I have read a lot of encyclopedias so I learned their anatomy through those books,” he shared. Amazingly, he retained the images that he saw and transferred them onto paper. “I always drew fast and I created works just how I imagined them in my head,” he shared. “I often incorporated a lot of detail into them, so it was never a problem for me.”

“I created my most detailed drawing when I was 10. It depicts a richness of life in a jungle canopy,” he said. “On some of the details, I worked using a magnifying glass because I wanted to depict even the tiniest blade of grass.”

Dušan said he prefers using natural mediums such as charcoal, but also draws in pen.

Around that time, his animal also began to increase in scale. He imagined that they would look spectacular in a bigger format and wanted to showcase them in their full grandeur, roaming in a natural habitat. “I needed large papers to accomplish that,” he said. “At first, those works were around one meter in length, and later, I made even larger ones.”

As for his favorite work, that came at the age of 13. Dušan dreamt of a galloping herd of antelope. Upon waking, he decided to draw them. “To capture that image, I needed a very large paper that I couldn’t find, so I asked my Facebook friends for help. One of my Facebook friends had sent me a huge roll of paper that was 10 meters in length,” he shared. “I started working on it immediately at the floor of my home and the work was soon finished.”

He has now also drawn a life-sized lion, elephants, birds, and other exotic animals.

The young Serbian’s fame has garnered him his own gallerist, and he has had seven solo exhibitions so far. He has had his own illustrated encyclopedia of prehistoric animals published and is seeking to have it printed in English. These days, he also draws commission works for patrons across the globe.

Today, Dušan spends less time drawing than in earlier years (now just a couple hours a day instead of the whole day), as he has academic obligations to tend to. He is currently attending two colleges, studying at the Academy of Fine Arts and studying philosophy in Belgrade. “I have broad interests so I am still not sure what will be my profession in the future,” he said.

The young prodigy’s love of nature, and implied love for art, speaks to a question he is often asked by reporters at his exhibitions: why does he draw? “My answer would always be the same,” he answered. “I draw because I love.”