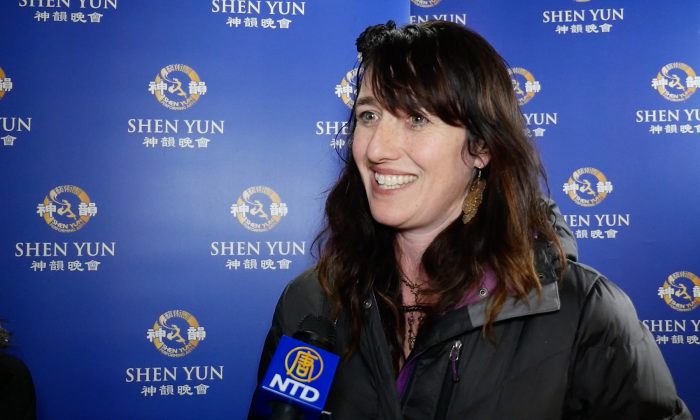 Having a background in fashion, Celestine Cornu enjoyed the colorful spectacle of costumes in Shen Yun Performing Arts at Lincoln Center, on Jan. 15, 2015. (NTD Television)

NEW YORK—Spring came early in the form of Shen Yun Performing Arts for artist Celestine Cornu, who was in the audience at Lincoln Center the evening of Jan. 15.

“It was a lovely balance, which seems to be the message of everything,” Ms. Cornu said. “You felt the heaven, the wind … You could feel that message throughout the dance.”

It is a culture said to be divinely inspired, filled with traditional values, such as benevolence, wisdom, respect for the divine. And Shen Yun’s mission is to bring this to life on stage, according to its website.

The performance was nothing short of a spectacle of inspiration for Ms. Cornu.

Ms. Cornu was born into art. With a creative family, she was painting and drawing before she could walk. Her studies and travels eventually led her to fashion, where Ms. Cornu worked as a design assistant for brands such as Ralph Lauren, Ben Sherman, and Gieves & Hawkes.

Because of that, “I was very drawn to the classical costumes,” Ms. Cornu said. And the costumes are many.

The dances performed cover stories spanning from ancient legends to current events, with ethnic and folk dances from the numerous minority groups across China’s vast nation. Brilliant, colorful costumes are created to set every scene.

“I loved the sashes,” Ms. Cornu said. “There was a lot of beautiful detail, and the harmony of all the colors together was lovely. It was drawing from a lot of different eras.”

The beautiful colors, together with the dance, was like spring for Ms. Cornu.

“I loved the ombre effect,” Ms. Cornu said and referred to an array of costumes.

In one dance, the female dancers portrayed phoenix fairies in skirts that melted from the lightest blue to a deep sapphire. In another, their costumes transitioned from white to pink. In the opening, several dancers wore skirts of orchid and threw sashes of gold into the air in perfectly controlled loops.

“It reminds me of flowers,” Ms. Cornu said. “The colors are very ‘pop,’ and bright.”

“Which really stands out in the middle of winter here, especially in New York,” Ms. Cornu said with a laugh.