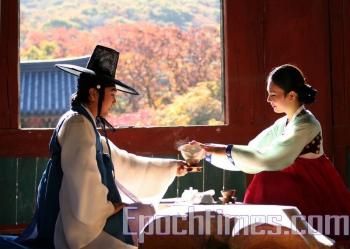 By Epoch Times Staff
Print
PASADENA, Calif.—The Pasadena Civic Auditorium, one of the finest venues in Southern California, was home to Shen Yun Performing Arts' New York Company this weekend. The sunny weather has welcomed both performers and large audiences.

David Henry is a commercial real estate broker, and his wife, Meagen Henry, works for a television animation company and is an artist, actress, and dancer.

Mr. David Henry was very pleased with the performance. He said, “It was just a beautiful portrayal of Chinese culture and history through the years, 5000 years." He also enjoyed learning about traditional Chinese culture.

Mrs. Henry said, “I work at an animation company right now but I used to work as an actress and a dancer for many years, but mainly as an actress.”

Mrs. Henry talked about the dance from a professional perspective, “The technique was incredible, they had such grace, and balance and poise. The choreography was really lovely and so varied, every single dance had a different style and I thought it was wonderful.”

His wife was motivated to go beyond her observations of the program and learn more about China. She said, “I felt I learned something, but it also makes me want to learn more, to go and study the different (historical) periods and also what’s happening now. I think that’s the beautiful thing about art, it not only inspires you but it inspires you to learn.”

Mr. Henry caught some details and insights in the program. “I also learned about the traditional religion or religions where reincarnation was a big component. I didn’t realize that and also that Buddhism played a large role and I thought it was beautiful.

"Also, for me the smiles of the performers … and I loved the backdrop with the animation transitioning into real life performers, I thought that was beautifully created."

Mrs. Henry jumped in about the backdrop animation—“Yes! It was useful to tell the story … I thought it was useful to explain who is the next group of people coming in because otherwise you’d have people coming from stage left and stage right and you’re like: ‘OK, who is that supposed to be?’ It was very clear.”

Mr. Henry continued, “It was also very helpful to show the transition between this world and the next world. (Ms. Henry: “Right, so you needed to have something.”) Something to show where the heavens and earth intersect.”