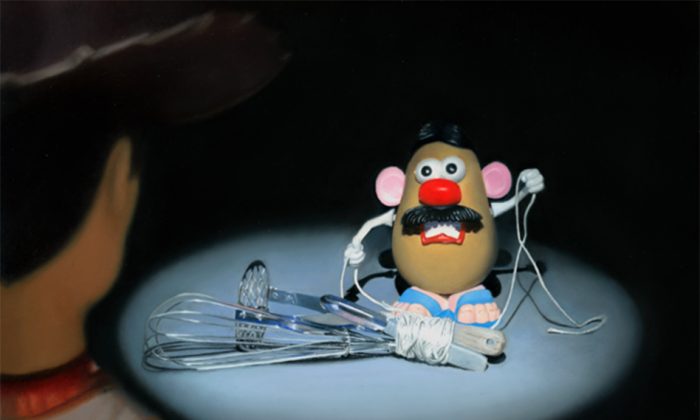 NEW YORK—Every brushstroke and mark made by these artists is aimed toward ultimate realism, but when confronted with the subject matter of heroes, villains, myths, and legends, some of the artists took a literal route and others a fanciful approach.

Inspired by the top-grossing films of the past five years, Howard and Alyssa Rehs, father-and-daughter co-directors of Rehs Contemporary Galleries, announced the theme of their second annual show in conjunction with Ani Art Academies, which offers free board and fine arts education to a select few budding artists.

Rehs’s first such exhibit, “The Big Gamble” last year, was a departure from 19th and 20th century painting, the gallery’s meat and potatoes.

Howard Rehs said he knew that showing and selling student work wasn’t going to bring in the sort of money as could a William Bouguereau painting, for instance. But since he considered Ani students to be part of the new generation of academic painters, he was willing to make a bet on their futures.

He also wanted to prove that in today’s art market, contemporary representational art could garner attention without the sort of shock-value of modern art.

Rehs won so hugely—over 700 people turned up for the opening of “The Big Gamble”—that he’s invited Ani artists back for an encore.

This time around, new students who had been forbidden to play with colors so they could focus on perfecting their drawing skills have graduated to oils. Their work in color shows off their individual creative impulses and maturation as artists.

This year’s exhibition also features a sizable group of work from Ani Art Academies Dominicana and Anguilla. The traditions and landscapes, legends, and myths of the islands show themselves in the works of many students.

For example, Felix Esteban Rosario’s charcoal-and-pastel drawing “Ciguapa” seems at first glance a classic nude of a serene young woman playing with her hair at the water’s edge—until you notice that her feet are disturbingly facing backward. A ciguapa is a mountain-lurking blue-skinned humanoid in Dominican myth, said to bewitch victims and put them to death.

Anthony Waichulis, Ani’s curriculum developer, creates trompe l’oeils that are jam-packed with symbolism and references to popular culture. A 7-by-5-inch oil-on-panel titled “Hi-Yo Silver” is inspired by “The Lone Ranger.” It features a sheriff’s badge, a Scrabble piece, a toy pistol, and all manner of tiny bric-a-brac—eye candy for the detail-oriented.

Some artists, like Ani founder and funder Tim Reynolds, depicted their personal heroes. Reynolds’s “Grande-Pierre” is a tribute to his father-in-law. The title is a conflation of the French word for “grandfather” and his name, Jean-Pierre.

Phil Kidd’s “Fable Fruit” gleefully plays with our confusion. What does a box of nuts have to do heroes, villains, myths, or legends? Upon closer examination with a magnifying glass, Bigfoot is revealed to be tiptoeing across the surface of a pecan. This drawing, like many others, met its buyer shortly after the exhibition opened. Whoever will be bringing it home is sure to have lots of fun fooling their friends.

Humor apparently flows as much as talent does at the Ani Academies. Sharon Hourigan’s Mr. Potato Head is caught in the act of tying up his greatest enemies—a potato masher and a whisk. In Susan Wallace’s imagination, Don Quixote is a real guy named Sir Vantes who wears T-shirts and experiences ennui.

In his or her own small way, each of these artists is a hero in busting an art-world myth—that academic art is stuffy, dead, or unimaginative.