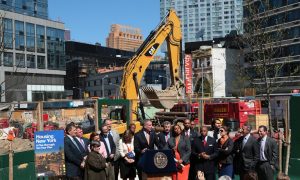 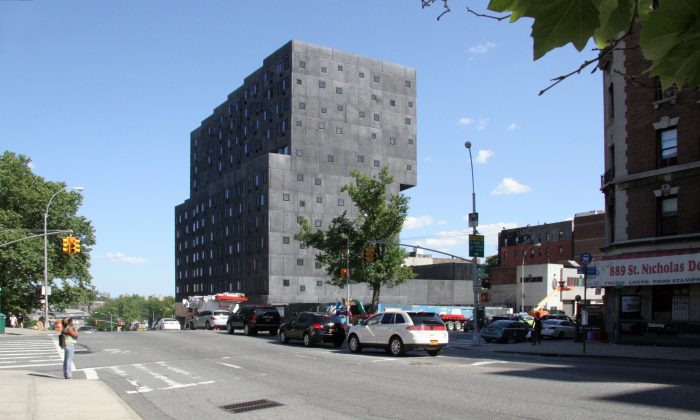 Infusing the cultural and artistic elements into affordable housing has been a hallmark of BHC’s developments, epitomized by the enchanting miniature city sculpture showcased on Monday in the Sugar Hill entrance plaza.

The site comprises 124 permanently affordable units. Tenants will begin moving in later this summer. A portion of the project, 25 units, will be set aside for formerly homeless people.

“A family of five making $28,000 can live in a three-bedroom here for a little over $500 a month,” Mayor Bill de Blasio said at a press conference Monday.

BHC has engineered a number of affordable housing sites, beginning with The Heights on 178th Street in 1986 and more recently the Dorothy Day Apartments on Riverside Drive in 2003. The latter also has integrated technology and cultural arts programs for youth.

“Art really is a powerful tool to upgrade a neighborhood,” Baxter said. “New York City is full of cultural institutions that are perceived to be for the elite.”

In contrast, BHC prides on installing art in sites in low-income neighborhoods. “The tenants are neighbors; they learn together how art can change perspective—whether it’s a poem or a painting,” Baxter said.

Comptroller Scott Stringer, also present at Monday’s pubic address, identified cultural appropriateness and child safety as key ingredients of successful community development, a sentiment reflected in the inclusion of The Children’s Museum of Art and Storytelling at Sugar Hill.

BHC’s community sites, including its urban galleries and child education centers are accented by the contributions of artists like Brendan Jamison and Mark Revels.

“These are places that families, children, go all the time.” Baxter said.