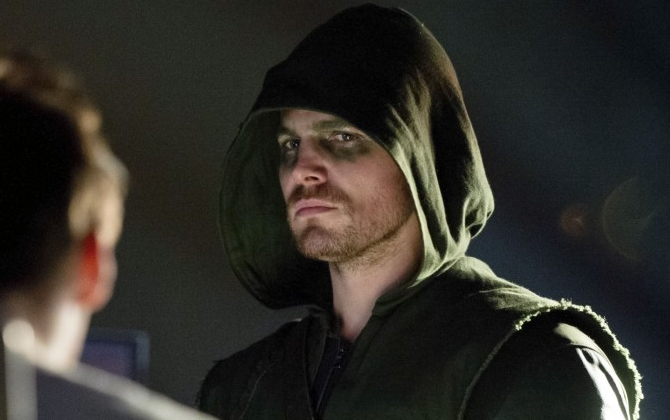 New Arrow season 3 spoilers have been coming out this week, including more information about the villains.

And the time jump within the universe has been revealed–the season 3 premiere will be six months after the end of season 2.

Check out some new details below.

The villain will be even more intense than Slade, executive producer Andrew Kreisberg told Entertainment Weekly.

“Slade had a very specific agenda—he was out for revenge and had set up this elaborate five-year plot,” Kreisberg said.

“What’s interesting about the villain in season three is that he doesn’t necessarily disagree with [Oliver]. He doesn’t have any personal animus towards the Arrow, and he actually in some ways has a very similar worldview. [But] the Arrow is thinking too small.”

Kreisberg said that the casting for the big villain will happen soon. Some fans think that it’s Ra’s al Ghul.

Many fans are excited that Oliver and Felicity may finally get together, and Kreisberg gave some more details about the date between the two which happens in the season 3 premiere episode.

“Let’s just say, Oliver is the one who has trouble completing sentences,” he told THR, noting that the timing was right to further evolve the Oliver and Felicity dynamic.

“The way the show has shaken out and the experiences the two have had, it feels like it’s time to explore that,” he said.

“Oliver might be catching up to how some of the audience feels in that maybe there’s a life with her.”

The dynamic between Thea and Malcolm will be explored, including what happened between father and daughter in the limo.

“We are going to do a flashback at some point in the season that takes you back to that car and continues the conversation, so you’ll get to see what Thea said to Malcolm and what Malcolm said to Thea,” executive producer Marc Guggenheim said.

“Laurel and Thea are the two characters we haven’t done as much with in the past and they have the strongest story lines that we’ve ever given them,” he added.

Roy, meanwhile, will feel guilt over why Thea left.

Diggle will be about to become a father, even going to the OB-GYN in the premiere.

Besides receiving interest from Oliver, Felicity will have a new love interest–Ray Palmer, aka the Atom (Brandon Routh).

“The verbal banter between him and Felicity this season is a new thing we’re bringing to the show that I think audiences will really like,” Kreisberg said.

“He’ll be invading Oliver’s life in every aspect, whether it’s his business, his personal life and possibly down the road in his nighttime activities.”

The flashbacks are going to be a lot different than the ones in the first two seasons.

“It has a whole new feel to [the flashbacks],” Kreisberg said.

“It was something we always intended on doing. One of our big ideas when we were doing the pilot was to have Oliver wake up at the end of season two not on the island.”

“We will learn how Oliver knows how to fly a plane,” he added.