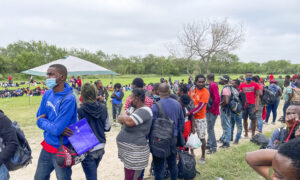 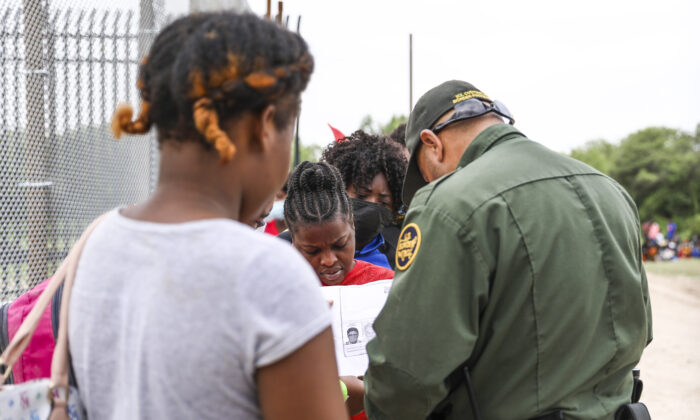 A Border Patrol agent starts organizing a group of more than 350 illegal immigrants after they crossed the Rio Grande from Mexico into Del Rio, Texas, on July 25, 2021. (Charlotte Cuthbertson/The Epoch Times)
US News

'We are encountering an unprecedented number of migrants'
By Zachary Stieber

The 212,672 encounters was up from 188,934, and represented the 15th consecutive month that the number of apprehensions has risen, according to Border Patrol records. It also marked the highest monthly total since March 2000.

The new numbers don’t include how many illegal immigrants evaded capture. In recent months, that number has been pegged at around 1,000 a day.

The most commonly encountered illegal aliens were single adults, but nearly 19,000 were unaccompanied minors.

That set a new monthly record for the population, and signaled the continued failure of the Biden administration in stemming what some experts say is a full-blown crisis.

“We are encountering an unprecedented number of migrants in between the ports of entry at our southern border,” Homeland Security Secretary Alejandro Mayorkas told reporters in Texas.

That surge, according to Mayorkas, is caused by worsening conditions in countries from which the migrants are leaving. He also claimed the Trump administration’s policies, which had resulted in a significant drop in illegal crossings, needed changing because they were “cruel.”

“And thirdly, and importantly, is the resurgence of the economy in the United States, and the gleam of the American promise,” he added.

Republicans and some experts argue that the Trump administration’s policies were lawful and were working well in stemming illegal immigration before the Biden administration altered or completely reversed key measures, such as stopping the “Remain in Mexico” program.

That led to law enforcement in some border areas increasingly taking matters into their own hands, such as Texas state troops arresting illegal immigrants with the help of officers from Nebraska, Iowa, and Florida.

“Impossible to overstate the scale of this cataclysm,” Stephen Miller, a top immigration adviser during the Trump administration, said in a social media statement in response to the newly released numbers from July. “The Biden Admin is purposefully, willfully, deliberately & maliciously demolishing our laws, borders and constitution,”

“President Biden’s disastrous open border policies have turned the border crisis into utter chaos,” Republicans on the House Homeland Security Committee added. “It’s time to stop pretending it will fix itself and take action to ensure the safety and security of all Americans.”

The Biden administration asserts it is taking action, including flying families to southern Mexico, and continuing to use Title 42 powers to expel some aliens, mostly single adults.

Nearly 94,000 were quickly ejected, using the powers, from the United States in July, according to federal data.

The flights are a way to try to counteract the fact that border agents are arresting some of the same people they’ve previously expelled, Mayorkas explained.

“If in fact, they’re turned around and placed in the northern part of Mexico, it is too facile, too easy for them, to return and try an illegal entry again. And so in response to that recidivism, to deter and prevent that recidivism from occurring, we are expelling them further into the interior of Mexico, where it’s far more difficult to try again,” he said.