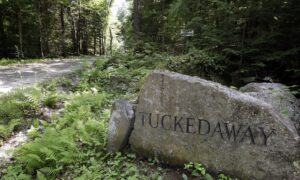 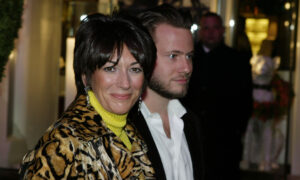 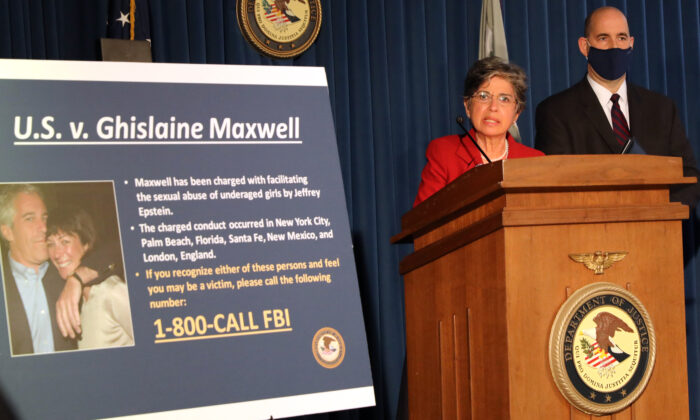 Audrey Strauss, acting US Attorney for the Southern District of New York, speaks to the media at a press conference to announce the arrest of Ghislaine Maxwell, the longtime girlfriend and accused accomplice of deceased accused sex-trafficker Jeffrey Epstein, in New York City, on July 2, 2020. (Spencer Platt/Getty Images)
Crime and Incidents

NEW YORK—The recent arrest of Ghislaine Maxwell, the former girlfriend and longtime associate of deceased sex offender Jeffrey Epstein, has placed her at the center of attention.

The 58-year-old is scheduled to attend a bail hearing in Manhattan on July 14. Multiple alleged victims have accused Maxwell in court filings of facilitating a sex-trafficking operation that brought girls to Epstein’s Manhattan mansion.

Epstein described Maxwell—a longtime member of Epstein’s inner circle—as his “best friend” in a 2003 Vanity Fair piece. He said Maxwell wasn’t on his payroll, though she appeared “to organize much of his life,” according to the magazine.

Maxwell is the daughter of late British media magnate Robert Maxwell, who founded a publishing house and owned tabloids including the Daily Mirror. It emerged after Robert Maxwell’s mysterious death in 1991 that he had looted hundreds of millions of dollars from employee pension funds to prop up his crumbling business empire.

Robert Maxwell, whom Ghislaine has accused of sexually abusing her, may have also been a Soviet spy. According to heavily redacted reports, Robert Maxwell and his business partner Kurt Wallersteiner ran an Anglo-Continental Exchange firm in London in 1953, where both had “allegedly been recruited by the Soviet intelligence service for espionage purposes.”

Ghislaine Maxwell, who was born in France, later moved to New York in the early 1990s where she worked selling real estate. Around that time, she began her romantic relationship with Epstein, a financier who lived a lavish lifestyle and attended high society parties.

In 2013 and 2014, Maxwell spoke at the United Nations in her capacity as the founder of the TerraMar Project, an oceanic conservation group. She largely disappeared from public view in 2016 and was particularly elusive after Epstein was charged with sex trafficking.

At an August 2019 hearing following Epstein’s death, ruled a suicide in a federal detention center in New York, some accusers urged federal prosecutors to go after Maxwell, The Epoch Times previously reported.

“I will no longer cover up what needs to be brought to light,” one accuser, Theresa Helm, testified at the time. Helm said she was recruited 17 years ago from California and was brought to New York.

“Ghislaine Maxwell … they need to be held accountable,” Helm said. “All of them.”

Nearly 2,000 pages of documents from a lawsuit by one of Epstein’s accusers, Virginia Giuffre, relating to Epstein were unsealed on Aug. 9, 2019, revealing allegations against a number of rich and powerful men and more information on the role Maxwell allegedly played.

According to the documents, Juan Alessi, Epstein’s former house manager, testified that during the 10-year period Maxwell was at Epstein’s house, there were “probably over 100” females he was told were massage therapists that entered the home.

Alessi said Maxwell, Epstein, and their friends were the ones who brought in the girls. He said their friends would “relay to other friends they knew a massage therapist and they would send [them] to the house.”

In announcing the charges, acting U.S. Attorney for the Southern District of New York Audrey Strauss said Maxwell herself “in some cases” participated in the sexual abuse of young children.

Maxwell has previously denied claims she recruited and directed young girls to have sex with Epstein and other men.

Julie Rendelman, a New York criminal defense attorney and former homicide prosecutor, told The Epoch Times that Maxwell’s attorneys “will have an uphill battle in getting the Court to grant her release pending trial,” noting the prosecution has indicated they believe Maxwell is an “extreme flight risk.”