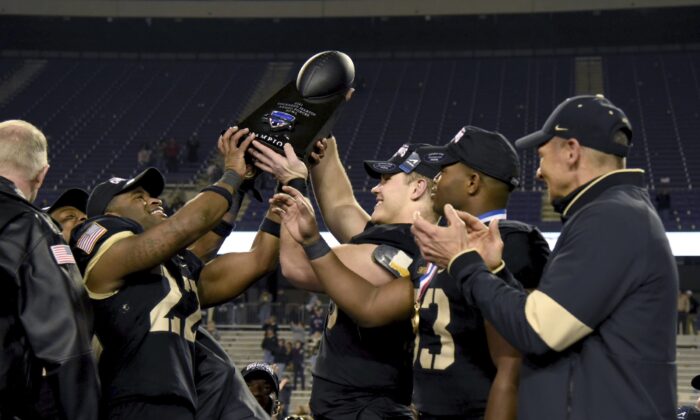 Army head coach Jeff Monken, right, looks on as his team celebrate with the trophy after their win in the Armed Forces Bowl NCAA college football game against Missouri in FORT WORTH, Texas, on Dec. 22, 2021. (Emil Lippe/AP Photo)
College Sports

The Army Black Knights gave up its first lead over the Missouri Tigers in the final minutes, but kicker Cole Talley split the uprights on the last play of game with a 41-yard field goal to win 24–22 in the Armed Forces Bowl on Wednesday in Fort Worth, Texas.

Since 2018, Army had lost seven straight games to power five opponents. It was the program’s first win over a power five program since November 2017 against Duke.

The Black Knights, 9-4, were perfect on five fourth-down conversion attempts, which ties them for the second best in any game this season. Coach Jeff Monken now has more wins than any other coach in Army history.

Army used three quarterbacks due to injury and their rare run-option offense; they threw just one pass in the first half for 42 yards, and was 5 for 8 in the second half, gaining 53 yards.

Third-string senior quarterback Jabari Laws came off the bench to lead the winning drive. He was the starting quarterback in 2019 before a knee injury sidelined him for over a year with two surgeries.

The first half was dominated by the Tigers leading 16–7, but had to settle for three field goals. They were short-handed in the secondary and then lost several players in the first half.

The Tigers opened the game with a 72-yard touchdown drive culminating with redshirt freshman quarterback Brady Cook scoring on an option keeper for 30 yards. He completed 27 of 34 passes for 238 yards, one touchdown pass, and  also rushed for 53 yards along with the first touchdown.

Following Talley’s missed 43-yard field goal attempt for Army, the Tigers increased their lead to 10-0 with a drive of 69 yards, resulting in a 22-yard field goal by Harrison Mevis, who would add two more field goals in the first half of 25 and 39 yards.

Army starting quarterback Christian Anderson scored their first touchdown with a 22-yard run to cut the deficit to 10–7, but was replaced due to an ankle injury in the third quarter. He finished with 60 yards passing and 33 yards rushing.

The Tigers controlled the first half, out-gaining the Black Knights 272 yards to 132, scoring on all four possessions.

Army was able to make a comeback in the second half, beginning with a 75-yard opening drive that finished with Jakobi Buchanan’s 10-yard touchdown run to cut the deficit 16–14.

The second-string quarterback, Tyhier Tyler threw a 14-yard touchdown pass to Brandon Walters to take their first lead 21–16 early in the fourth quarter.

The Tigers started on their 17-yard line with 2:44 left. Cook capped off a 83 yard-drive with a six-yard touchdown pass to Keke Chism to regain the lead 22–21; but he overthrew a wide-open Dawson Downing failing on the two-point conversion.

“I did some good things,” Cook said. “Missed the throw when it mattered most.”

Army had 1:11 left, and marched 51 yards to set up the winning field goal by Talley.

Talley is a native of Rockwall, which is 60 miles east of Fort Worth, Texas. He said he was thinking about the brotherhood of Army football players when he went out for the final kick.

“We trust Cole, he’s a great kicker,” said  coach Monken. “He had nerves of steel, and the whole brotherhood on his back. What a great kick. I’m really proud of him, and the protection was good. It took a whole team effort out there to get that done.”

Army senior linebacker Arik Smith was chosen as the game’s MVP, with 12 tackles and two sacks.

“These guys responded,” added Monken. “They wanted to win this game so badly, especially for these seniors. Just an incredible effort to come down to the last play of the game. Unbelievable. I’m really proud, what a great way for our season to end, and these seniors to finish their careers.”