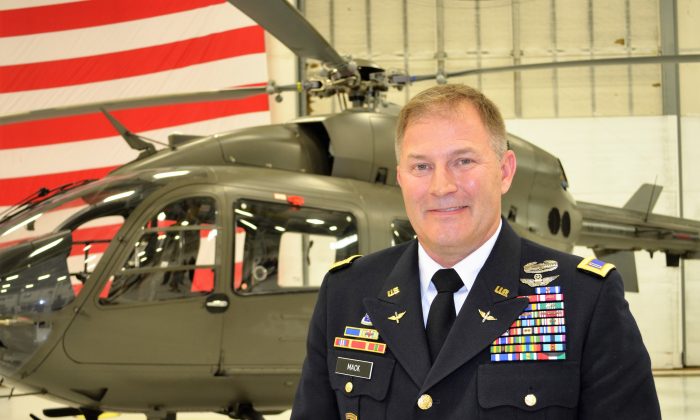 NEW WINDSOR—He’s been where all the action was taking place around the world—Iraq, Afghanistan, East Berlin, South Korea, and more.

A key player in some U.S. missions, former Chief Warrant Officer 5, Alan Mack, handled himself with distinction as one of the most experienced helicopter pilots in the armed forces.

“Alan Mack is an American hero. He is truly an American hero,” said Ed Harrison, general manager of Stewart International Airport, who attended Mack’s retirement and change of command ceremony.

On July 1 Commander Mack announced his retirement after an illustrious 35-year career in the Army.  He commanded the Second Aviation Detachment at West Point, which flies out of Stewart. Mack’s retirement officially begins on November 1.

The change of command and retirement announcement went off with expected military precision. Bouquets and single roses were presented to the ladies of both commanders. Music was provided by the West Point Band’s field music group, the Hellcats.

Friends, family, and military colleagues gathered at the Second Aviation hangar at Stewart Air National Guard Base to celebrate his achievements and wish him well in his next endeavors.

Rutledge, a former Navy Seal, transferred to the Army in 2002. In their 14-year professional relationship, Mack mentored Rutledge and taught him to fly. When it was time to select a replacement, Mack hand-picked Rutledge as his successor.

The detachment also supports local firefighting and rescue efforts. The hangar at Stewart houses UH-72 Lakota helicopters that are used in diverse missions in the region.

County Executive Steven Neuhaus said the Second Aviation regularly assists in county emergencies. “They help if somebody’s lost in the woods, they help us with the injured.” Neuhaus said Mack and his unit were ready to assist during the fatal crash at last year’s air show. “We have a very good working relationship,” he said.

Mack and the men under his command work with community groups , his favorite being the New York Air Show. “We’ve had a good run,” he said.

Mack enlisted in 1981 and trained as a helicopter pilot. He has flown 6,700 hours in Chinook helicopters. The first Chinook helicopter was developed in 1962, according to militaryfactory.com, and is still in service today. Its primary roles are to move troops, and deliver artillery and supplies to the battlefield.

Mack says everything changed with 911. “My journeys, my experiences around the world, and my time spent training and rehearsing, would now be put to use.”

“MH-47 was the only U.S. Army helicopter capable of supporting special operations in the higher mountainous regions of Afghanistan and as such played a major role in that theater,” according to specialoperations.com.

Mack planned and led the first helicopter flights into Afghanistan for Operation Enduring Freedom, which led to the fall of the Taliban and the return of the U.S. Embassy in Kabul to American control.

He flew the famed “horse soldiers,” the Special Forces ODA 595, the first time into Afghanistan. They were so named because they rode horses in the mountainous region, where they provided support for dropping laser guided munitions and helped take the cities of Kabul and Mazar-e-Sharif.

Mack said one of his fondest memories was regaining the U.S. embassy in Kabul. “I had the benefit of being the first American helicopter pilot to land into the courtyard of that embassy since well before the soviet occupation.”

Mack soon came to realize that his time in the field was ending. “It was time to move on. A Chief Warrant Officer 5 cannot stay at the end of this spear for long.”

Mack said the West Point post was a “dream job.”

“The opportunity to work here in support of the academy was a gift I didn’t see coming,” he said.

Mack grew up in Portsmouth, New Hampshire, “a free-range teenager,” he said wryly.

Deployed to South Korea after the assassination of South Korean Dictator Park Chung-hee, he witnessed the transition of that country to a stable democracy.

He arrived in Germany before the fall of East Germany, passed through the infamous Checkpoint Charlie, and clearly saw the difference between communism and democracy. “Democracy was definitely better,” he said.

As part of Special Operations, he met a new enemy, ISIS, and played a key role in taking down Osama Bin Laden. Mack credits a group effort of the special forces. He was decorated for Bin Laden’s capture/kill but says he “can not claim credit for being on the ground the night [Bin Laden] was actually killed.”

He participated in the very first Bin Laden mission and several throughout the years and that, “at Abbottabad, Pakistan, we got lucky. This time he happened to be there.”

His successor said “the nation is retiring a great warrior. Al was the planner and lead for missions we now read about in the history books,” Rutledge said. “He had the reputation of executing special operations nobody else could or would try.”

Mack’s son Andrew, said his family was like any other military family. Of his dad, he was “definitely always proud of him. He’s done a lot of good things.”

Caslen appreciates Mack’s professionalism in handling West Point’s diverse missions. “When you have a guy like Chief Mack in charge of all that, you know it will be done and be done right.”

The commander’s mother Annalee Mack experienced some tense moments during her son’s career. “One time his plane was down. It’s just terrifying but you just…you think it’s not really happening,” she said. “It’s nice to have him home and nearby.”

Brian Lilly, organizer of the New York Air Show, came in just for the retirement. He acknowledged Mack’s help in bringing the show to Stewart. “This year already he’s helped us get a number of things that we will be announcing soon.”

Mack’s wife, Patrice Lestrange, beamed with pride throughout the ceremony. “The comments about his courageousness and his loyalty from three and a half decades is something that fills me up with just so much pride,” she said.

Patrice does communications for the American Cancer Society and will continue in her job. “We do great work here in the Hudson Valley and I have a lot of exciting opportunities ahead of me here,” she said.

Mack and Patrice are now entering a new stage together. He said they like the Hudson Valley and intend to make Orange County their home.

Before that, “I’ve got to go see the grandkids,” Mack said. “And I’ll come back and see what I can do.” The Macks will be visiting his son Stephen, a naval pilot stationed in California, and a brand-new granddaughter.

Looking forward to a second career, Mack said he hopes to do something in public service.

Mack said the transition to West Point helped him to gear down from the intense activity in Special Operations. He doesn’t expect to do much flying, like a Nascar driver who retires from racing. “He retires and jumps in a car. He’s still driving, but it’s not the same.”

The Legion of Merit is one of the U. S. military’s most prestigious awards, according to the Army Times, and one of only two metals worn around the neck, the other being the Medal of Honor.

Many hope and expect Mack will bring his experience and qualities of character to the county. He seemed to be ready when he said, “Orange County, here we come.”

The original version of this article was corrected to indicate the Chief Warrant Officer Mack did not take part in the raid that killed Osama Bin Laden. The Epoch Times regrets the error.