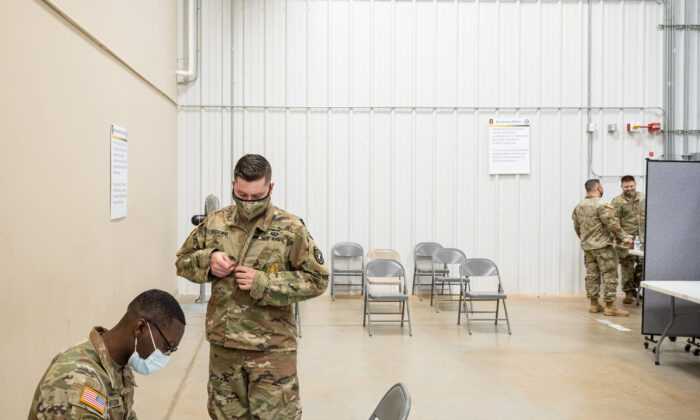 The U.S. Army is belittling and putting pressure on soldiers who are seeking religious accommodation to the vaccine mandate, according to service members who have refused to take the jab. Prohibiting off-base travel and promotions are only a small part of the greater push to compel service members like them to get out of the Army, they said.

Such actions come as the Army, like other branches of the military is struggling with recruitment woes; the Army has only met 52 percent of its fiscal year 2022 recruiting goal.

As a member of one of the Army’s most elite military units trained to conduct special operations worldwide, Staff Sergeant Drew Miller (a pseudonym) told The Epoch Times, “Soldiers who continue to object to the COVID-19 vaccine are being punished, not physically, but in a way that’s forcing them out of the Army.”

“Several years of training and funding put into these individuals to become some the Army’s best is currently being wasted,” he said, having served over 10 years in the service. Miller spoke to The Epoch Times using a pseudonym due to fear of reprisals.

“I and many others are simply stuck at [a military installation] doing nothing associated with what we’ve been trained to do,” he added, lamenting that “our job has been basically taken from us.”

On top of that, Miller said, some of the Army’s most elite teams are being broken apart. “And in the process, we’re being hit with every kind of fearmongering, coercion, and bully tactic that you can think of to get us out of the Army,” he added.

The belittlement, according to Miller, began immediately following Secretary of Defense Lloyd Austin’s August 2021 announcement of a military vaccine mandate. “Shortly after, they brought us all together in an auditorium in front of the peanut gallery to tell us that the reason America was in decline was because of [unvaccinated] people like us,” he said. Essentially, various members of command said, “people like us included all those not willing to give into the unlawful order,” he added.

Miller described the treatment he and others received on a regular basis as “mind-blowing.” “Each of us has the ability to critically think and has the ability to differentiate between a lawful and unlawful order,” he said. Miller, like others who oppose the mandate, believes that the mandate is unlawful.

He said that even though there are legitimate reasons to refuse the COVID-19 vaccine, “we’re being told that the military has no use for us, and they don’t need people like us who are questioning things.”

Careers are being threatened and soldiers are being coerced, he said. “We’re being told that if we don’t get the shot, we’re going to get kicked out and not able to find a job.” And while he and several others are holding strong against the threats, Miller said, “We’re sitting at desks and typing on a computer rather than learning, training, and doing our jobs.”

Soldiers are “being brushed under the rug and basically sent to a dark office or dark corner somewhere.” That, he said, is “wasteful.” Miller is extremely concerned that “many [American] people don’t understand how significant this is and how it is tearing apart our nation’s military.”

While the Air Force, Navy, and Marines have been temporarily barred by court orders from punishing service members who have sought religious exemptions to the vaccine mandate, the Army does not face such restrictions.

After four years of service, Army Specialist John Sisler (a pseudonym) said his immediate command in September 2021 initially supported his request for religious accommodation to the COVID-19 vaccine mandate. As of today, he still awaits a final determination.

While other unvaccinated soldiers were denied, Sisler slipped through the cracks earlier this year and was allowed to attend the National Training Center in Fort Irwin, California. After completing about two of four weeks of valuable training, command changed their decision. “They pulled me out of the box,” he said. “I begged to stay, because I didn’t want to miss the training or leave the people I was training with.”

Sisler then returned to a rear detachment and was told that his religious accommodation packet was lost. “I was given about six hours to resubmit everything by the end of the day,” he said. “Thankfully, I had the wherewithal to keep all the documents from before and I used that to resubmit and get new signatures from an entirely new command.”

A few months ago, the new packet was not denied, but “rejected and kicked back,” he said. “All my paperwork came back because it was supposedly incomplete.” According to him, it was not complete because a senior officer failed to document and file one of the documents properly. After that, he said, “everyone but the religious head, the chaplain, recommended a denial.”

And rather than being allowed to restart the packet, Sisler said, “the package was pushed back to the top without my approval in the months to follow; it was pushed back up without my acknowledgment and signature.” As a result, when it comes back again, Sisler said he is “taking everything to the inspector general and filing complaints about all the broken rules and unlawful actions.”

As he awaits this next step, Sisler said he’s been “degraded, demeaned, and belittled” in his new unit. When there is a face-to-face formation of soldiers, he is told to “go away.” Strangely, he is also not included in “any group chats” or “social messaging” that would typically help keep him informed. The intent here, he believes, is to “say I failed to report, so they could start demoting me or punishing me.”

“I’ve been told that I’m not a real solider and would be chaptered out of the military,” said Sisler. “I’m being unfairly treated because of my religious objection to the vaccine.” He also said that some commanders are “simply waiting for religious objectors to get removed.” As he awaits a final determination on his religious accommodation request, he said, “I’m just keeping my head down and trying to get out when I can.”