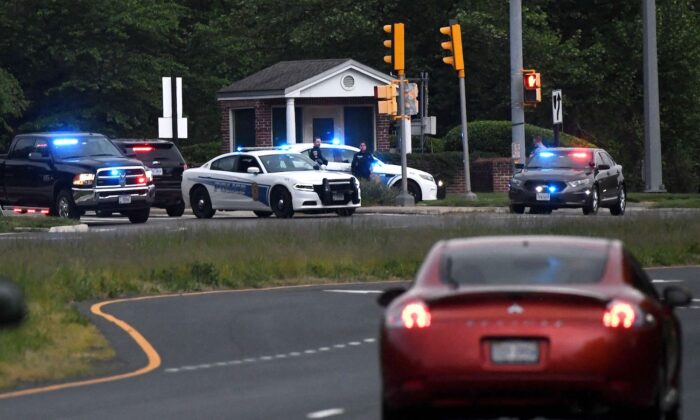 Police cars are seen outside the CIA headquarters's gate after an attempted intrusion earlier in the day in Langley, Virginia, on May 3, 2021. (Olivier Douliery/AFP via Getty Images)
Crime and Incidents

WASHINGTON—A man shot by the FBI outside CIA headquarters when he got out of his car with a weapon has died, the FBI said on Tuesday.

The man, who has not been identified, was shot at around 6 p.m. on Monday outside the heavily protected main gate of the CIA compound in suburban Langley, Virginia.

The shooting followed a standoff that lasted for hours, an official familiar with the incident said.

He was taken to a hospital, where he died of his wounds, the FBI’s Washington Field Office said in a statement.

A shooting occurred back in 1993 near the CIA headquarters when Mir Aimal Kansi, a Pakistani national, shot and killed two CIA employees and wounded three others while they were waiting at a stoplight to enter the compound.

Kansi fled the country and was later captured in Pakistan in 1997, extradited to the United States, where he admitted to shooting the victims. He was convicted of murder and sentenced to death. He was executed in 2002.