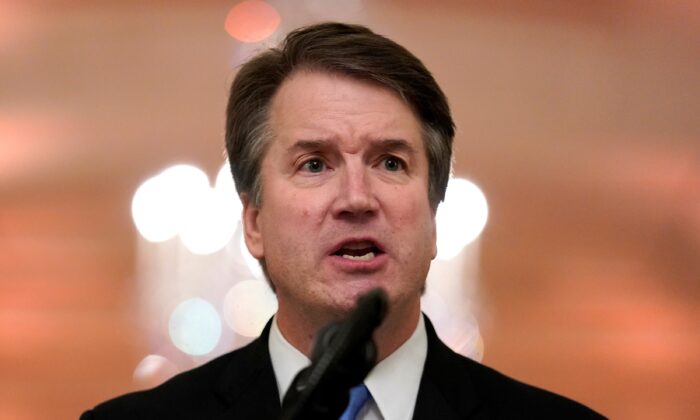 Supreme Court Associate Justice Brett Kavanaugh speaks during his ceremonial public swearing-in, in the East Room of the White House in Washington on Oct. 8, 2018. (Jonathan Ernst/Reuters)
US News

An armed man was arrested on June 8 near the Maryland home of Supreme Court Justice Brett Kavanaugh, according to the nation’s top court.

“At approximately 1:50 a.m. today, a man was arrested near Justice Kavanaugh’s residence. The man was armed and made threats against Justice Kavanaugh,” Patricia McCabe, a spokeswoman for the court, told The Epoch Times in an email.

The man was transported to Montgomery County Police Department’s 2nd District Station, which is in Bethesda.

Kavanaugh lives in Chevy Chase, a short drive away.

McCabe did not answer questions seeking more details, such as whether Kavanaugh was home when the man was arrested.

The man was later identified as Nicholas John Roske, of California.

A spokeswoman for the Montgomery County police told The Epoch Times that officers took an adult male from California into custody and transported him to the station.

“The case was then transferred to the FBI,” she said, declining to share more details.

According to charging documents, Roske was armed with a gun and a knife when he exited a taxi outside Kavanaugh’s home. He was arrested after calling 911 on himself.

Attorney General Merrick Garland told reporters in Washington that “this kind of behavior is obviously behavior that we will not tolerate,” saying threats of violence and actual violence against justices “strike at the heart of our democracy and we will do everything we can to prevent them and to hold people who do them accountable.”

Justices are being protected 24 hours, seven days a week, Garland said in May. That followed a reported spike in violent threats against the justices.

President Joe Biden did not address the matter while speaking to reporters before boarding Air Force One in Maryland, but White House press secretary Karine Jean-Pierre told reporters on the plane that “the president condemns the actions of this individual in strong terms and is grateful to law enforcement for quickly taking him into custody.”

Some lawmakers, including Sen. Ben Sasse (R-Neb.), have called for Biden to personally condemn what took place.

Protesters have regularly gathered outside the homes of Kavanaugh, a Trump appointee, and other Republican-appointed justices in recent months, following the leak of a draft opinion that indicates the court is poised to strike down Roe v. Wade, the 1973 decision that established access to abortion as a constitutional right.

The Department of Justice and authorities in Virginia and Maryland have declined thus far to bring charges against any of the protesters for violation of laws that prohibit attempting to intimidate judges by protesting outside their homes.

Ruth Sent Us, an activist group that published the addresses of Kavanaugh and some other justices, said on Wednesday that the group was “committed to non-violence.”

On the Senate floor in Washington, Senate Minority Leader Mitch McConnell (R-Ky.) decried what happened, saying “This is exactly the kind of event that many feared that terrible breach of the court’s rules and norms could fuel.”

It remains unclear when the finalized opinion in the case, which was brought by the state of Mississippi after an appeals court found its ban on abortion after 15 weeks of pregnancy was unconstitutional. The court released one opinion Wednesday in an unrelated case.