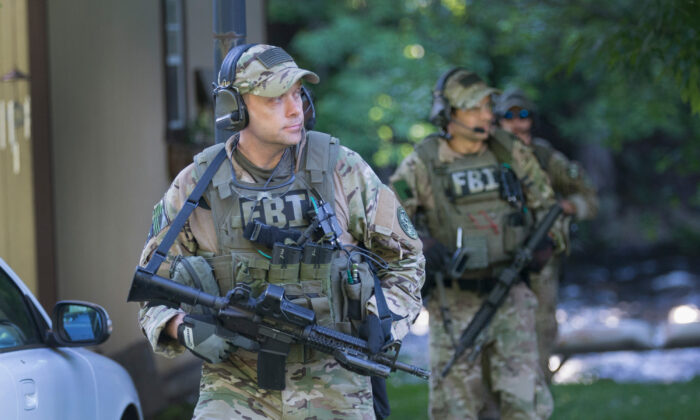 A Tennessee pro-life activist said FBI agents arrested him for so-called Freedom of Access to Clinic Entrances Act (FACE Act) violations with guns pointed at him.

Paul Vaughn recently told The Daily Signal that agents came to his home with “guns pointed at the door, banging on the house, yelling and screaming, ‘Open up. FBI,’ that kind of thing.”

“When I opened the door and saw the guns pointed at me, I asked them what they wanted, who they were looking for, and they said they wanted me,” he said.

Vaughn said some of his children were in the yard and were getting ready to go to school.

“I had kids in the yard walking out to get in the car to go to school. I was about to take them to school, and other kids in the house,” he said. “So seeing that the easiest path to de-escalation was me in handcuffs, I stepped outside and put an end to the ranting and the banging and the yelling.”

FBI officials didn’t respond to a request for comment by press time.

His wife recorded footage of the incident, showing several agents—including one holding a rifle—as they were getting into a vehicle. When she asked for one of the agents’ names, he refused to speak to her before the unmarked vehicle they were in drove away.

“I want to know why you were banging on my door with a gun,” she says in the clip. “You’re not going to tell me anything?”

The agent replies, “I tried.”

Video of the FBI’s arrest of Paul Vaughn of Centerville, Tennessee. DOJ charged him with “conspiracy against rights secured by the FACE Act, and committing FACE Act violations” for blocking the entrance to an abortion clinic. Paul tells me the footage was taken by his wife. pic.twitter.com/KSDvLRSrlF

Vaughn and about a dozen other pro-life activists were charged with alleged FACE Act violations stemming from a 2021 protest at a Tennessee abortion clinic. Some of the activists have told the media that the protest, or “blockade,” was peaceful.

Prosecutors said Chester Gallagher and others conspired to “blockade” a clinic in Mount Juliet, Tennessee, utilizing Facebook to coordinate travel and logistics. The group blocked a woman and an employee from entering an abortion clinic, officials said, citing livestream footage.

Gallagher also said he and those with him were “willing to be incarcerated” to “rescue families from this place of destruction.”

“On March 4, 2021, Coleman Boyd and Chester Gallager advertised the blockade of the Carafem Health Center Clinic, in Mount Juliet, Tennessee, which was planned for the following day,” the Department of Justice (DOJ) said in a statement referencing the Tennessee incident. “In his social media post, Gallagher referred to the blockade as a ‘rescue.’ Boyd also began a Facebook livestream broadcast of the clinic blockade at 7:45 a.m. on March 5, 2021.”

But, according to Vaughn, the DOJ’s actions against him and the other activists is “nothing more than suppressing free speech.”

“It’s the same thing going on nationwide,” he told The Daily Signal. “If you’re right-of-center, conservative American-loving patriot, the Department of Justice is looking to silence that kind of thought.”