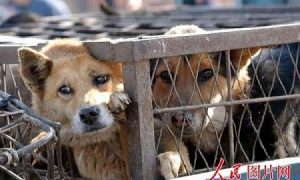 Dogs and Cats Skinned Alive for Their Fur in China
0 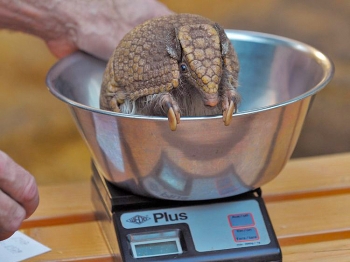 Armadillo 'Gurt' sits on a balance as he is weighed during the annual inventory at the zoo in Dresden, eastern Germany, on January 13, 2011. 'Gurt' has a weight of 1,347 grams. (Matthias Hiekel/AFP/Getty Images)
Science

By Epoch Times Staff
Print
Armadillos have been shown as the likely culprit in the spread of leprosy to humans in southern United States, according to a new study published in the New England Journal of Medicine on April 27.

Armadillos are the only other animals known to contract leprosy beside humans. Through DNA analysis, a team of Swiss researchers concluded that armadillos might have transmitted the bacterium that causes leprosy, Mycobacterium leprae, to humans in areas such as Louisiana and Texas.

The scientists found that a strain (genotype) of this bacterium was present in 28 of 33 wild armadillos, and 25 of 39 U.S. patients studied, who lived in areas where exposure to leprosy-affected armadillos was possible.

“This genotype has not been reported elsewhere in the world,” according to the abstract of the study, which is titled "Probable Zoonotic Leprosy in the Southern United States."

The researchers were able to acquire data on patient contact with armadillos in 15 cases. They found that eight people had come into contact with the animals, including one person who hunted and ate them frequently.

In conclusion, Humans should avoid contact with armadillos. “People hunt them, eat them, make souvenirs out of their shell,” study author Pushpendra Singh of Ecole Polytechnique Fédérale de Lausanne in Switzerland told LiveScience.

“Eating or handling raw or improperly cooked meat should be avoided, as it may have enormous number of bacteria if that armadillo had leprosy,” he added.

Leprosy, also known as Hansen’s disease, causes skin lesions and can permanently damage peripheral nerves. This disease is known to have existed since Biblical times. However, nowadays it can be treated with a long course of antibiotics.

U.S. Department of Heath and Human Services says that 150 cases of leprosy occur nationally each year. At least 100 of those incidences are transmitted via humans from a different country, such as India or Brazil, where leprosy is more prevalent. Yet the other 50 cases are in people who claim to have never traveled abroad, nor contacted a leprosy-affected person.

"Now we have the link," James Krahenbuhl, who heads a government leprosy program that commissioned the study, told AP.