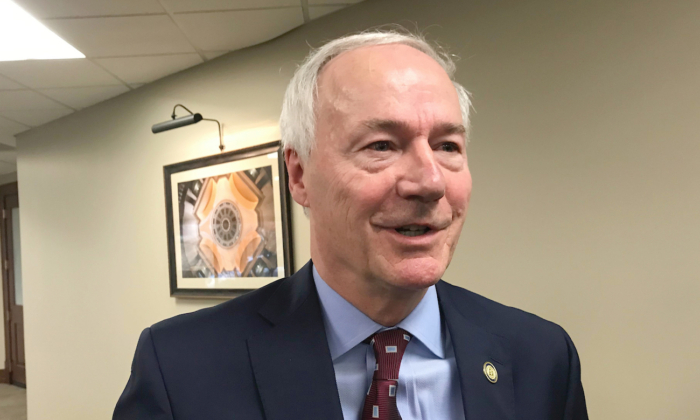 Arkansas Gov. Asa Hutchinson on Oct. 13 allowed a new law to go into effect that will allow employees to opt-out of vaccine mandates by proving they have acquired immunity to the CCP virus or by submitting a negative COVID-19 test.

The bill became law without Hutchinson’s signature under a provision in Arkansas law which makes bills awaiting a governor’s signature to become law after five days. Governors have previously used this legal mechanism to express their disapproval of certain legislation, according to The Associated Press.

“I am opposed to the current mandate by the Biden administration, but the solution is not to place additional mandates on employers at the state government level,” Hutchinson said on Wednesday, according to The Associated Press.

“The solution is not to put employers in a squeeze play between state and federal law,” the Arkansas governor said, according to The Hill. “Employers need the freedom to protect their employees and their customers, and government should not interfere with that freedom through mandates.”

President Joe Biden directed the federal government to adopt a rule requiring private companies with more than 100 employees to vaccinate their workforce.

The language of the Arkansas bill (pdf) says that it was created to address the federal vaccine mandate. The law requires employers who impose vaccine mandates to create a process for exemption requests.

Hutchinson said the amount of time before the opt-out law takes effect gives the state more time to weigh its impact on businesses and for any court challenges to be filed.

But he also called the proposal unnecessary and counterproductive.

“The debate on these bills has been harmful to our goal of increasing vaccination rates in Arkansas,” he told reporters.

All but a few private and government vaccine mandates in the United States allow exemptions for people who have natural immunity to the virus, even though studies show that such immunity is both durable and robust.

Republicans in other states have also taken steps to block or undercut Biden’s mandate. In neighboring Texas, Gov. Greg Abbott issued an executive order barring private companies or other entities from requiring vaccines. Calls for special legislative sessions to counter vaccine requirements have also been heard in Wyoming, Kansas, and South Dakota.