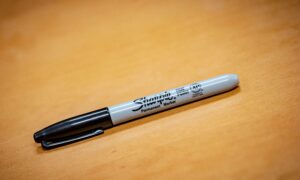 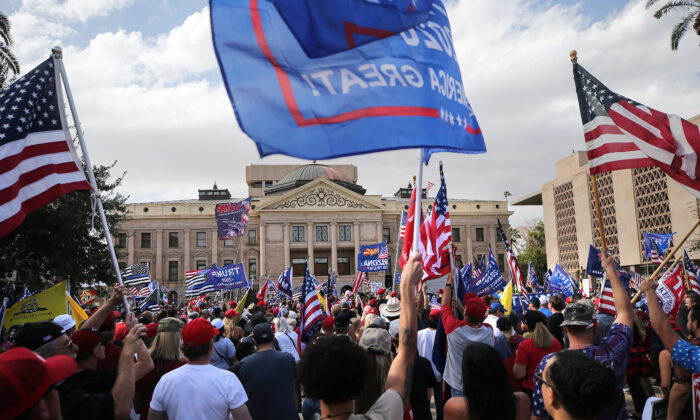 Supporters of President Donald Trump demonstrate at a ‘Stop the Steal’ rally in front of the State Capitol in Phoenix, Ariz., on Nov. 7, 2020. (Mario Tama/Getty Images)
What Voters Say

Arizonians Rally Outside State Capitol Over Integrity of Voting Counts

PHOENIX—Hundreds of Arizonians gathered peacefully outside the state’s capitol on Nov. 7 to voice their concerns about the integrity of the voting count process just hours after Democratic nominee Joe Biden declared victory in the presidential race—a declaration disputed by President Donald Trump.

The rally, one of many similar protests this past week across the city, comes alongside a lawsuit filed by the Trump campaign over alleged rejected votes in Maricopa County, the largest county in the state. The campaign stated that some in-person votes were disregarded because of improper guidance from poll workers.

Aside from Arizona, voters have voiced their concerns in gatherings across the country including in Michigan, Washington, and Detroit.

In downtown Phoenix, a number of voters at the “Stop The Steal” rally said they believe the election is going to play out via a long and contentious battle in the courts. They remained optimistic, albeit a little frustrated.

“I hope we can get it to the Supreme Court and they can rule on it. But, again, until that time we don’t know. That’s why we’re here,” Steven Carroll, who was at the Nov. 7 rally, told The Epoch Times.

“There’s things going on all across the United States where we see there’s problems going on, and the mainstream media doesn’t want to look at it,” he said. “We will see how it plays out.”

Worries over mail-in voting mishaps or other potential ballot issues in Arizona aren’t just over one-off situations, according to Cheri Morello.

“I’ve met many people here that said they went to the polls, they completed their ballot, and they’re hearing that their vote has been canceled,” she said. “I think that’s a valid concern.”

Ballots are still being counted in the state, with Biden and Trump remaining neck and neck as of the morning of Nov. 8.

A winner for the state still hasn’t yet been declared.

“What’s going on isn’t right,” said Jordan Knowles. “This election is rigged. I can’t wait for the truth to come out.”

Flor Lino, who was juggling multiple Trump flags in her hands at the rally, said she also believes it’s going to end up going to the courts.

“It may take until next year,” she said. “Right now its a little up in the air, but I’m hopeful.”

The sentiment among the crowd was a mix of optimism and pent-up frustration. Chants such as “protect the vote” and similar phrases broke out often among the group.

According to the Trump campaign, beginning on Nov. 9, it will start prosecuting its case in court to make sure election laws are fully upheld and the rightful winner seated.

One voter, who is new to Arizona, said it’s OK to question what is going on, in terms of the integrity of the election process and its systems. Dan, who declined to give his last name, wondered why it had taken more than five days to get the ballots counted in Arizona, despite a huge number being counted on the night of the election.

“I think the media keeps using the wording ‘widespread fraud,’ but what level of fraud are we acceptable to agree to?” he asked. “Any fraud I think erodes the confidence.”

A Republican couple, Rex Nelson and his wife, Charise Nelson, said they felt confident that Arizona would end up going to Trump. They both said they have no faith in the integrity of the state’s election process.

When they voted during the election, they didn’t personally experience any issues but said they know people who told them about various problems they had with the voting processes.

“For us it did go through, but a lot of our friends didn’t go through,” said Rex. “The election system has been shot, nobody will ever trust it again. There needs to be IDs, it needs to be verified.”

“A lot of their votes were canceled, didn’t go through,” Charise said.

According to Rex, there needs to be recounts in multiple states across the nation, including in Arizona: “Every legal vote needs to be counted.”

For Charise, she said the truth will come out sooner or later.

“I just hope and pray that the corrupt will be exposed, that’s all I want and hope for,” she said. “I will continue fighting for America, just like my kids did and everybody who fought for our freedoms. “