Arizona Woman Made $7.2 Million From Human Smuggling in 6 Months: Police 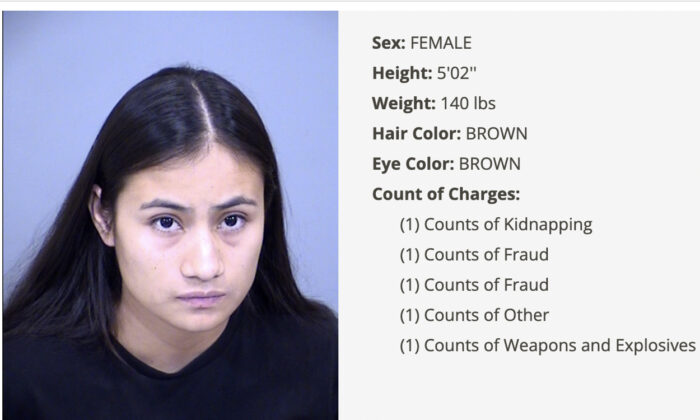 Tania Estudillo Hernandez, 24, was arrested and charged with crimes related to human smuggling and possession of weapons, in El Mirage, Ariz., on Sept. 23, 2022. (Maricopa County Jail)
By Charlotte Cuthbertson

A 24-year-old Arizona woman was arrested and charged with crimes related to a human smuggling enterprise on Sept. 23, according to the El Mirage Police Department (EMPD).

The woman, Tania Estudillo Hernandez, had allegedly held or processed 80 to 100 illegal aliens per month at a residence in El Mirage over at least a six-month period, the police department stated in a Facebook post.

Police said the department received a report of a person being held for ransom at the El Mirage address on the morning of Sept. 23.

“The complainant stated in the residence there were multiple people kidnapped, including her husband,” the EMPD stated.

During a subsequent search warrant executed at the home, police seized a semi-automatic rifle, two handguns (one of which was reported stolen in Phoenix), and ammunition.

“Ledgers documenting human smuggling, and other evidence of human smuggling was seized, to include evidence that Tania Estudillo Hernandez managed and directed smuggling operations,” the EMPD stated.

Hernandez was booked into Maricopa County Jail on violations of kidnapping, money laundering, illegally conducting or participating in an illegal enterprise, and conspiracy, police said.

El Mirage, which is located in the greater Phoenix metropolitan area, is less than a three-hour drive to the U.S.–Mexico border.

The Tucson Border Patrol sector in Arizona leads the nation in known “gotaways,” who are illegal aliens who Border Patrol detects, but fails to capture. Border Patrol reported about 10,000 gotaways in the Tucson sector per month during the past several months, according to provisional Customs and Border Protection data obtained by The Epoch Times.

Border agents in Arizona have apprehended more than 514,000 illegal aliens in fiscal year 2022, which ends on Sept. 30.