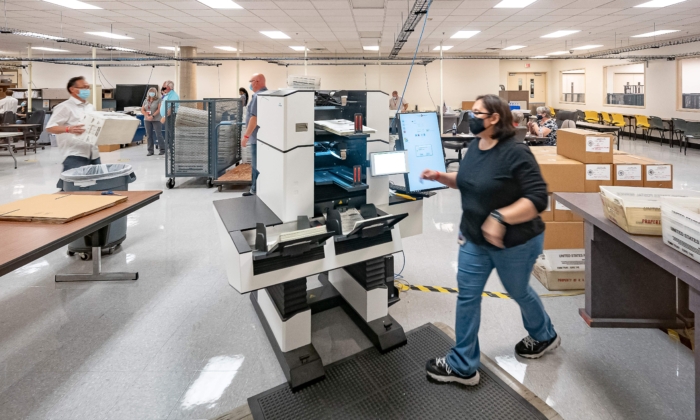 Ballots are counted at the Maricopa County Election Department in Phoenix, Ariz., on Nov. 5, 2020. (Olivier Touron/AFP via Getty Images)
Arizona

The president of the Arizona Senate and the chairman of the state senate’s Judiciary Committee filed a lawsuit on Dec. 21 asking the Maricopa County Superior Court to enforce a pair of subpoenas that sought ballot tabulation equipment and voting records from county election officials.

Arizona Senate President Karen Fann and Senate Judiciary Committee Chairman Eddie Farnsworth, both Republicans, had issued the subpoenas to the Maricopa County Board of Supervisors on Dec. 15. In response, the board voted against complying and filed a lawsuit to determine whether it is obligated to produce the materials sought.

The Arizona Senate lawsuit (pdf) states that after the Nov. 3 election, state lawmakers were inundated with questions and complaints from citizens who were concerned with the integrity of the election and whether their votes were correctly counted.

“In consultation with President Fann, Chairman Farnsworth determined that these widespread concerns warranted a comprehensive independent investigation by the Judiciary Committee, to include a full forensic audit of tabulation devices and other voting equipment in Maricopa County,” the lawsuit states.

The senators plan to use the results of the audit to determine whether to certify or reject the presidential electors for Joe Biden, which have been transmitted to the U.S. Congress and are due to be counted on Jan. 6, 2021.

The first subpoena requested access to ballot tabulations used in Maricopa County for the Nov. 3 election, in addition to related software, hardware, and removable media. The senators also requested voter rolls, voter records, paper ballots, and other records. The second subpoena demanded a number of electronic files, including images of all the ballots cast in the county on Nov. 3.

The county could have fulfilled a substantial part of the request by Dec. 18, but didn’t do so as of Dec. 21, according to court documents. The senators asked for an order from the court enforcing the subpoenas.

Arizona’s Republican Party filed a motion to intervene in the lawsuit filed by Maricopa County against the senators as part of its fight against complying with the subpoenas.