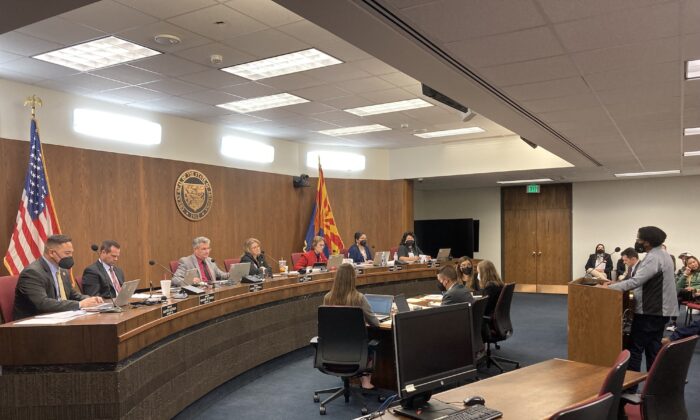 Arizona resident Dana Allmond speaks out against an election integrity bill regarding making electronic ballots public record at a hearing of the Arizona Senate Committee on Government in Phoenix on Jan. 24, 2022. (Allan Stein/The Epoch Times)
US

PHOENIX—A Republican majority of the Arizona Senate Committee on Government passed a slew of election integrity measures on Jan. 24, that they say will ensure future elections are secure and legal.

The panel also approved a bill that would set time limits on the duration of a public state of emergency.

More than 120 people attended the public hearing in the state Senate building in Phoenix on a dozen proposals, eight of which passed by a narrow 4–3 or 4–2 partisan vote following often lengthy discussions.

SB1120, which was approved on a 4–3 vote, would implement currency-grade ballot countermeasures to safeguard against fraud or forgery of ballots.

“We need to come up with a standardized ballot,” said Republican state Sen. Sonny Borrelli, the bill’s key sponsor. “We want to make it easy to vote, hard to cheat.”

Borrelli credited Republican state Rep. Mark Finchem with doing the legwork to identify a vendor to produce certified ballots using watermarks on security-grade paper. He said the ballots would provide “banknote-level security,” and cost about 25 cents each to produce.

Each ballot would include a secure holographic foil with a “proprietary original image in visible and multiple-color invisible ultraviolet inks” for added security, the measure’s language states.

The proposal was filed in direct response to allegations of voter fraud in Arizona during the 2020 presidential election, in which numerous ballot discrepancies in Maricopa County alone sparked a forensic audit and recount last year.

Cyber Ninjas, a Florida-based company hired by the Senate to conduct the audit, stated its review found in the recount a vote discrepancy of 994 in the presidential race and 1,167 in the U.S. Senate race. The company’s report highlighted potential issues with a combined total of 53,305 ballots.

While Joe Biden carried the state by about 11,000 votes over then-President Donald Trump, many conservative voters and state officials continue to dispute that margin of victory as false.

“How much would you pay to make your ballots (more secure)?” Borrelli asked the audience rhetorically.

Arizona resident Barbara Jennings said she supported the bill because “fraudulent elections have severe consequences. And that’s what we’re experiencing right now—inflation, high gas prices. Every penny put into [secure ballots] is worth it.”

Sens. Martin Quezada and Sally Ann Gonzalez, both Democrats, opposed the idea of a single vendor of ballots, while Sen. Theresa Hatathlie, another Democrat, also voted against the bill, saying it needs work and allows room for error.

Gonzalez added that she thinks Arizona already has free and fair elections.

Borrelli said, “I have no problem with a single source (vendor) if it gets the job done,” noting that Microsoft is a ubiquitous single-source provider of computer equipment and software.

“We want it to be proprietary. We don’t want someone counterfeiting a ballot,” he said.

To those who say that proposed ballot countermeasures won’t work, Borrelli responded, “Horse pucky. Guess what? Arizona is leading on this technology.”

“You know what my constituents tell me?” said Republican state Sen. Wendy Rogers, a committee member. “You don’t work for anybody else but us. We want this bill, and with that, I vote yes.”

As a citizen of the former Yugoslavia, state resident Veronica Gorgoran said she believes in free and fair elections.

She also supports SB1009, a bill that seeks to limit state executive powers in declaring a public state of emergency, such as a pandemic.

Under SB1009, Arizona’s governor would issue an initial proclamation “with respect to a state of emergency” for a period not to exceed 30 days and to be extended for not more than 120 days if deemed necessary.

However, the state Legislature has authority to extend the decision “as many times as necessary by concurrent resolution, but any extension may not be for a period of more than 30 days,” according to the text of the legislation.

The bill’s main sponsor, Republican state Sen. Michelle Ugenti-Rita, said the aim of the proposal isn’t to subvert the emergency management process but to establish “fixes important to the process.”

Scottsdale resident Gail Golec spoke in support of the measure to ensure that government is “no longer holding us hostage in this state. We have a constitution.”

Quezada, who voted against the emergency powers bill, said more discussion is needed and that “at the end of the day, this is about public health.”

“I like this bill. It ends [a state of emergency] and it has to be important enough to come back and extend it,” said Senate Committee on Government Chair Kelly Townsend, a Republican.

Other approved bills included SB1119 to make electronic ballot images public records, SB1133 to prohibit all mail-in ballots in Arizona schools and cities, SB1012 to create a federal voter registration database, SB1013 to repeal laws relating to the Arizona Secretary of State, SB1054 to require in 2022 going forward a review of election equipment security for counties with a population of more than 500,000, and SB1008 regarding automatic recount requirements.

The adopted bills are expected to go to a Senate vote in the next few weeks, Rogers said.

On Jan. 31, the committee will take up the four remaining proposals: SB1028 to add ballot paper security measures, SB1055 regarding election process involving contractors and contracts, SB1056 regarding misplaced ballots, and SCR1005 to address issues with federal ballot voters.

According to the Brennan Center for Justice, 19 states have enacted 33 voting restrictions in 2021 and more than 425 bills with provisions that limit voting access were introduced in 49 states during legislative sessions last year.