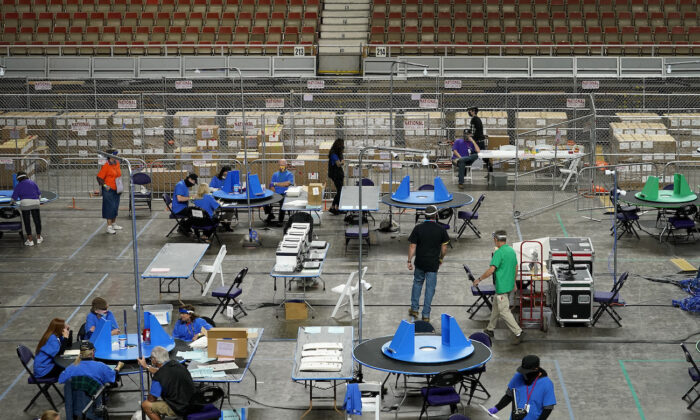 Spokespersons for the audit taking place in Arizona’s largest county are pushing back on a report that claimed auditors have discovered hundreds of thousands of missing ballots.

“There’s been no such finding yet,” Ken Bennett, a former Arizona Republican secretary of state, told The Epoch Times.

He confirmed that there haven’t been any missing ballots discovered during the audit thus far.

Randy Pullen, a former chairman of the Arizona Republican Party who is also serving as a spokesman for the audit, told reporters at the election review in Phoenix that the missing ballot claim is “crazy.”

The report was published by National File and cited Josh Barnett, who’s running for Arizona’s 6th Congressional District. Barnett was described as an audit organizer.

“We found a ballot shortage, anywhere from 5 to 10 percent of the votes,” Barnett said. “It looks like a couple hundred thousand ballots are unaccounted for. The ballots are missing.”

Barnett didn’t respond to a request for comment by press time.

A Maricopa County spokesman told The Epoch Times in an email that the county’s Elections Department provided the 2,089,563 ballots as demanded by the state Senate’s subpoena.

Audit teams hired by the Senate have been poring over the nearly 2.1 million ballots cast in Maricopa County in the 2020 election at Veterans Memorial Coliseum in Phoenix since late April. They’ve also been reviewing data from machines used in the election and other election material.

Auditors are down to the last few boxes of ballots, according to Bennett. The boxes primarily contain ballots that have been duplicated, such as when overseas voters email or fax their ballot and the vote is placed onto a regular ballot by poll workers so machines can scan them.

Attention is increasingly turning to paper evaluation, which includes looking at which ballots have folds and whether alignment on the front and the back of each ballot is correct.

“By the end of today, almost all of our resources will be deployed on paper evaluation,” Bennett said.

That evaluation is expected to take most of June to complete. The Arizona Senate has control of the coliseum through June 30.