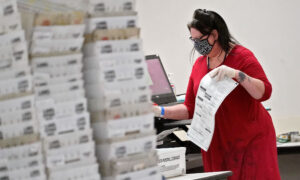 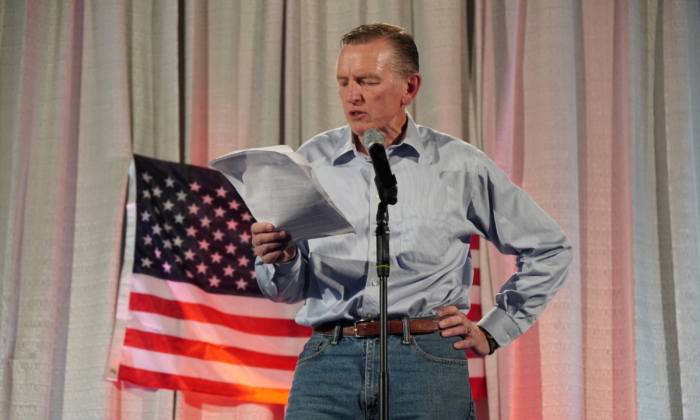 Rep. Paul Gosar (R-Ariz.) descrbes reports of Jan. 6 protestors being held in solitary confinement at a rally to free the 535 "political prisoners" on July 14, 2021, in Scottsdale, Arizona. (Allan Stein/Epoch Times)
US News

Hoisting flags and political signs, more than 250 Arizona conservatives rallied in Scottsdale on July 14 to demand the release of pro-Trump protesters being held in federal prisons since Jan. 6.

“This nation will not be [made] safe by cowards,” said keynote speaker Matt Braynard of Look Ahead America, co-sponsor of the rally with local branch Look Ahead Arizona, at Sue Wood’s Scottsdale Studios.

Both groups have called upon conservatives to organize at the community level to free more than 500 pro-Trump protesters in federal custody.

Braynard, a former Trump data analyst, is leading the charge with Look Ahead America to release what he called “political prisoners.”

He said the July 14 rally was a run-up to a large political protest to be held on July 17 at a federal prison in Washington.

While the FBI has arrested 535 protesters, Braynard said, “in almost all cases, these were non-violent” people.

“They’re losing their jobs because their employers don’t want to employ them,” Braynard said, noting that 100 to 200 people have been held without bail since they were arrested. “They’re not forgotten.”

He also spoke of the shooting death of Ashley Babbitt by a still unidentified White House security member inside the Capitol building on Jan. 6.

“I can’t help but wonder how a 90-pound woman who clearly was not armed—why the response was a bullet,” Braynard said. “You’re in the cross-hairs, too. The insurrection narrative is the root of a very poisonous tree—the ‘Big Lie’ of insurrection.”

The rally was framed around Arizona’s coyote-skin clad “Q-Anon Shaman,” Jacob Chansley, who turned himself in to authorities three days after the Washington protest.

Jeff Blase of Phoenix, wielding a “Free Jake!” sign, said he attended the rally to support Chansley and other political detainees.

“If you know anything about Jake, he’s a non-violent person,” said Blase, who participated in other protests with Chansley. “Jake is a very smart individual as well.”

To prove his point, Blase said Chansley was videotaped inside the Senate Chambers leading the protesters in prayer.

“The reason I’m here is because of people like Jake who are nonviolent and who are being held in the [federal] gulag,” Blase said.

“Mr. Chansley has been in solitary confinement since he voluntarily and peacefully surrendered himself to federal authorities on Jan. 9,” Watkins told The Epoch Times in an email. “His mental health and emotional well-being are significantly challenged. His ability to focus on his own defense has been encumbered.

“He was not violent or disorderly or destructive in any manner. He was not armed. He did not threaten. There is no end in sight. His only reliable unmonitored contact with the outside world is his attorney—me. He is alone.”

Martha Chansley, Jake’s mother, told those attending the July 14 gathering that her son called her just minutes before the rally.

“He is very touched and he really appreciates you and your love and your support and your prayers, because it’s really tough. It’s a tough time,” she said.

“It takes a lot of courage to do what you know is right. Let’s continue to keep this faith because ultimately, in the end, God wins.”

Congressman Paul Gosar (R-Ariz.) told those attending the rally that he was protesting for the fair treatment of those arrested in connection with the Capitol breach.

“There are reports that some of the prisoners have been tortured or held in solitary confinement 24 hours a day,” he said.

“What are they trying to hide? Americans deserve the truth. [The prisoners] need to be treated fairly and with due process. So we have come here to demand equal justice under the law.”