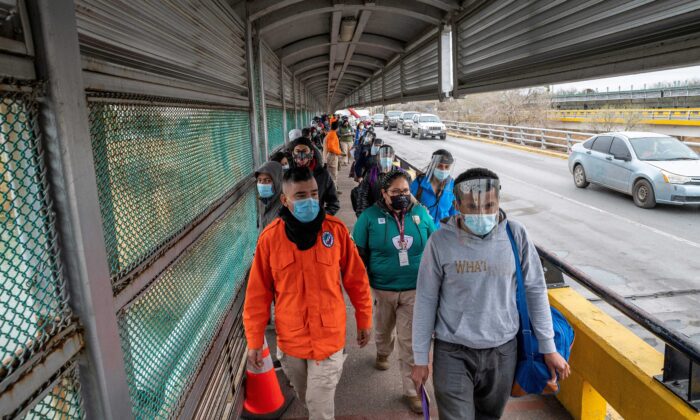 The mayor of a small town in Arizona told Fox News on Monday he is extremely concerned about the surge of migrants at the Mexican border and the large numbers that will be released into his “economically depressed” community.

Chris Riggs, an independent mayor of the town of Gila Bend said he has seen an increase in foot traffic in the last few weeks, which he attributed to the federal government not doing enough to stop people from entering the United States through Mexico.

“We can barely afford to take care of the people that we have here, and as of [March 2], Border Patrol advisers are basically going to drop people off here, [telling us] ‘they’re your problem,’” said Riggs.

Gila Bend has a population of around 1,900 people and is located in the southwestern portion of Maricopa County, 70 miles southwest of Phoenix, and is a gateway to the Sonoran Desert National Monument.

“We just do not have the ability to care for these people,” Riggs added. “Quite frankly, it’s going to cost us tens of thousands of dollars a year to be able to just provide them with a bottle of water and a sandwich when they get dropped off.”

Many of the migrants who are attempting to cross the U.S.-Mexico border illegally into the United States claim that President Joe Biden encouraged them to come.

“Biden promised us that everything was going to change,” Gladys Oneida Pérez Cruz, a woman who traveled to the border with her child, told The New York Times on March 14. “He hasn’t done it yet, but he is going to be a good president for migrants.”

Democrats have blamed the former administration for the problem at the southern border, saying there was a “backlog” and that migrants are now feeling “hopeful” about the more “humane” immigration policies of the Biden administration. The GOP, meanwhile, blames Biden’s executive orders that were issued to reverse Trump-era immigration rules.

Responding to a reporter who asked if the surges in immigration were linked to Biden’s undoing of Trump-era border policies, Roberta Jacobson, Biden’s southern border coordinator, said in early March: “We’ve seen surges before. Surges tend to respond to hope, and there was significant hope for a more humane policy after four years of pent-up demand.”

“There was a hope for a more humane policy after four years of pent-up demand, so I don’t know if I would call that a coincidence,” said Jacobson.

Sen. Jeff Merkley (D-Ore.), when asked by CNN’s Alisyn Camerota if it is “fair to call what we’re seeing today at the border a crisis,” pointed to the Trump administration’s immigration policies that he said created a backlog of children waiting in Mexico.

Merkley said children coming to the border now were “stranded, some for months, some for years, by the Trump administration in Mexico under completely intolerable circumstances.”

Republicans have been quick to denounce the surge of migrants at the border, with House Minority Leader Kevin McCarthy (R-Calif.) leading a delegation of about 12 GOP representatives to the border on March 15.

Meanwhile, Riggs said Border Patrol is not able to give him any information about the total number of illegal immigrants being dropped off, their criminal history, or their health records.

“We are completely in the dark, and we’ve asked documentation, some kind of documentation, give us something, and we’re still not getting anything, so we’re really very frustrated with how we’re being treated for a crisis that they started,” Riggs said.

The Department of Homeland Security did not immediately respond to a request for comment.

McCarthy told reporters that doctors he spoke to on his visit to the border said more than 10 percent of migrants test positive for the CCP (Chinese Communist Party) virus before being released into U.S. communities.

“Well, you’re being stored together. In a time when the president will keep our country closed, then maybe we have hope for a Fourth of July, to get together just with our family, how much spread of COVID is he creating every single day by his policies along this border?” said McCarthy.

Riggs is concerned about the elderly population in his town being exposed to the virus through illegal immigrants that are arriving in his community.

“I have a lot of seniors and elders here between Gila Bend and San Lucy Village that are susceptible to COVID,” he said.

“We have not seen the [CCP virus] outbreak that other areas have seen in Arizona, yet we’re going to get punished for their choices,” he said.

The mayor said his home is adjacent to the Sonoran Desert National Monument, and when he takes walks he is seeing more illegal immigrants and “drug mules,” or someone smuggling drugs on behalf of a larger organization.

The U.S. Customs and Border Protection agency stated that they’ve encountered more than 100,000 migrants at the border in February alone, while numerous elected officials who represent border areas have described the situation as a crisis. White House officials have so far declined to refer to it as such.

“It needs to stop. The federal government has to step up and do its job. They’re the ones that created this problem, they need to fix it,” Riggs said.