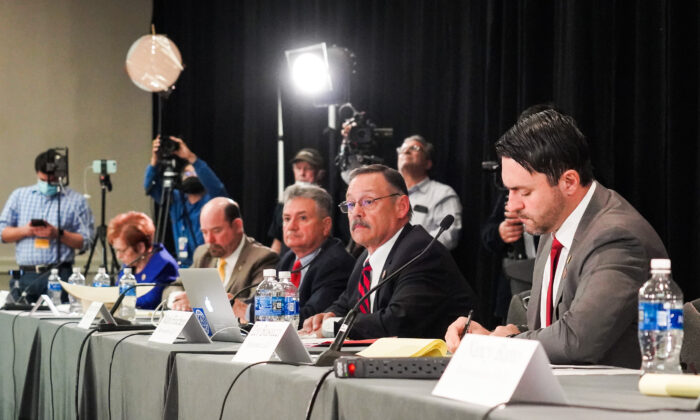 At a public hearing in Arizona with select members of the state legislature and members of President Donald Trump’s legal team, lawmakers called for their colleagues to support an upcoming resolution that would delay the release of the state’s Electoral College votes.

Arizona state Rep. Mark Finchem told reporters during the Nov. 30 hearing that they hope to have a resolution “within the next 24 to 48 hours.” The state holds 11 Electoral College votes.

“We are clawing our Electoral College votes back, we will not release them,” Finchem said. “That’s what I’m calling on our colleagues in both the House and Senate to do—exercise our plenary authority under the U.S. Constitution.

“There is a legal brief out there that says we are not tethered to state statute when it comes to this one question.”

In total, nine Republican state lawmakers attended the meeting, which was held at a hotel in downtown Phoenix. They had requested permission to hold a formal legislative hearing at the state Capitol but were denied by the Republican House speaker and Senate president, according to The Associated Press.

Trump’s attorneys Rudy Giuliani and Jenna Ellis, alongside witnesses, appeared in front of members of the Arizona Legislature alleging that considerable voter fraud occurred in the state. They also pushed for the Republican-majority state House and Senate to hold a vote on the certification of the election.

During the hearing, a cybersecurity expert said the user manual for Dominion Voting Systems machines guides users on how to connect to the internet, and that the machines, used by multiple states, were connected to the internet during the election.

“The Dominion suite user manual is about an inch and a half thick. My team went back through the user manual and looked at all the instances where in the user’s manual, it tells operators to connect the ethernet cords to the router, and it is, the systems are connected to the internet,” said Phil Waldron, a cybersecurity expert and retired Army colonel.

“They are connected to the internet. There is no transparency of how the voter information is processed, moved, and stored. And, as a matter of fact, these companies have refused to allow any type of inspection into their code and they always decry, it’s our IP, it’s IP protection.”

Arizona’s secretary of state on Nov. 30 certified the state’s presidential election results. Secretary of State Katie Hobbs, a Democrat, said in a press conference that despite the pandemic and other complexities, “we had an extremely well-run election and saw historically high voter participation.”

During the hearing, a volunteer poll observer and worker in Arizona’s Pima County told Republican Arizona state legislators that she had been told by state election officials to allow people to vote who may not have been properly registered to vote in Arizona on Election Day.

According to Pima County’s elections website, people can vote if they have lived within Pima County “at least 29 days prior to the general election.”

These people, she said, had out-of-state driver’s licenses but attempted to show proof they could vote by presenting a utility bill that suggested they lived in the precinct.

Orth then alleged she had spoken to a poll observer who said he was from Los Angeles and told her “he was there to turn Arizona blue,” meaning Democratic.

She said the man told her: “We’re here specifically to turn this precinct blue. This is one of our problem ones. I came from another precinct in Maricopa [County].” There was a group of them there, she added.

The man’s job, Orth said, was to make sure that anyone who was turned away from voting could vote. When questioned further, the man allegedly said he is in contact with several lawyers to make sure of that, according to Orth, who said she submitted an affidavit about her claims under penalty of perjury.

Also, on Nov. 24, the head of the Arizona Republican Party filed a petition for early inspection of mail-in-ballot envelopes and signatures. The court petition against the 11 Arizona Democrat presidential electors also seeks inspection of duplicate ballots with their originals in Maricopa County.

“A formal legal elections challenge is expected to be filed soon alleging that the process used to validate ballots returned by mail was legally insufficient,” the Arizona Republican Party said in a statement. “The critical process of verifying a signature determines whether a vote is counted.”

At the hearing, Trump’s lawyers Rudy Giuliani and Jenna Ellis pushed for the GOP-majority state House and Senate to hold a vote on the certification of the election.

“Your political career is worth losing to save the right to vote in America,” Giuliani told the Republican senators. “At times in our history, men and women stepped forward to defend Americans’ rights and liberties.”

The U.S. Constitution, Giuliani said, stipulates that state legislatures have the authority to certify a state’s electors.

“You, the legislature of Arizona, have the plenary power to regulate the selection of electors in a presidential election,” he said, adding that the Supreme Court has ruled that state houses and senates can reclaim the power to name electors.

“I don’t see how a decent, honest person could let this happen.”

Ellis said the president’s campaign wasn’t asking the legislature to overturn the results of the election, but to rather, not certify allegedly fraudulent results.

The office of Arizona’s secretary of state didn’t respond to a request for comment by press time. Previously, Hobbs said she had seen no evidence of irregularities or fraud in the election that could overturn the results of the election.

Earlier, Giuliani opened by saying that socialist-leaning politicians and officials have gradually eroded the personal liberties of Americans, noting that the allegedly fraudulent election process on Nov. 3 was an extension of that.

“We have been warned for 20 years that going to major mail-in ballots … will be fraught with tremendous fraud,” he said. “We were warned by former President Jimmy Carter,” former Supreme Court Justice David Souter, and prominent Democrats to “never do it.”

“Democrats used to be against mail-in ballots,” he said, adding that the current crop of politicians has reversed that viewpoint to gain more “money and power.”

In Arizona, much of the state’s alleged fraud had to do with the mail-in ballot system, Giuliani said.

“Once the ballot is separated from the envelope, it’s gone forever,” he said.

In Pima and Maricopa counties, there are hundreds of thousands of votes that should be “declared null and void,” the former mayor alleged. There was “clear fraud” in which poll workers were observed changing votes in Arizona, he said, remarking that ballot box stuffing also occurred.