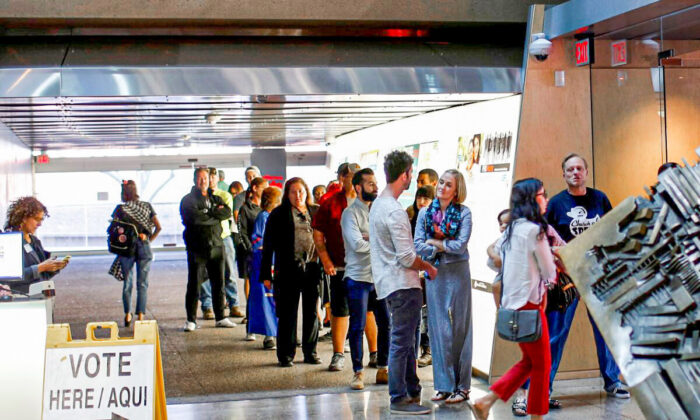 Authorities in Maricopa County, Arizona, confirmed Tuesday morning at a news conference that around 20 percent of the vote centers in the county are experiencing issues. At around 4 p.m. ET, Maricopa officials said they have “identified a solution to the tabulation issues” at dozens of polling locations, blaming “printer settings.”

“In about 20 percent of the vote centers …  when people will go and try to run the ballot through this tabulator, maybe one out of every five or so, of those ballots are not going through,” said Maricopa Board of Supervisors Chair Bill Gates. “It’s not like both of the tabulators in these 20 percent of locations are having these issues. It might only be one.”

Gates said that the problem is not preventing people from casting their ballot, saying that voters can deposit their ballot in a drop box.

“Those ballots will remain secure in there all day long and at the end of voting after 7 p.m., when everything is completed, these ballots will be taken out securely and delivered by a bipartisan team … down to here at the central tabulation center,” Gates said.

“Everyone is still being able to vote,” Gates said. “No one is being disenfranchised … and none of this indicates any fraud.”

Earlier in the morning, Arizona GOP Chairwoman Kelli Ward wrote there were “BIG problems with” vote tabulators, explaining there were “tabulator ‘malfunctions’ at at least 6 places. DO NOT PUT YOUR BALLOT IN ‘BOX 3′ TO BE “TABULATED DOWNTOWN.’ Maricopa will not be turning on the downtown tabulators today.”

Elections officials in Maricopa County, which was the subject of an Arizona Legislature-backed audit in mid-2021 over the 2020 election results.

“If you’re at a polling place experiencing an issue with a tabulator, you have three options & your vote will be counted in each. 1) stay where you are and wait for tabulator to come online 2) drop your ballot in the secure slot (door 3) on tabulator 3) go to a nearby vote center,” wrote Gates on Tuesday.

There are issues with the precinct-based tabulators that the paper ballots are fed into. We are aware of the issue and are working to get technicians on site as soon as possible.

Stephen Richer, the Maricopa County recorder, earlier in the morning said on Twitter: “Over 23,000 people have already checked in in person and successfully voted. We have tabulator issues at a few locations, but the backup plan allows those votes to still be tabulated.”

Richer told local media outlets that they’ve seen “a few tabulator issues” where the machine is not “immediately taking the ballot” in several locations, including the Burton Barr Library and Christ Lutheran Church.

“Instead it can either be Central count tabulated here, or if that issue can be addressed there, then it can be fed into the tabulator … or voters can go to any of the other 221 voting locations,” Richer added.

His office responded to a video that appeared to show an elections worker in Anthem, Arizona, telling voters that Maricopa County machines weren’t working.

“If a tabulator is not working at a site, you can still vote! You have the option to cast your ballot and place it into the secure ballot box. The poll workers on site at the voting location are best equipped to help you ensure your ballot cast,” the county recorder’s office said in response.

The Epoch Times has contacted Maricopa County’s Elections Department and the manufacturer of the voting tabulators for comment.