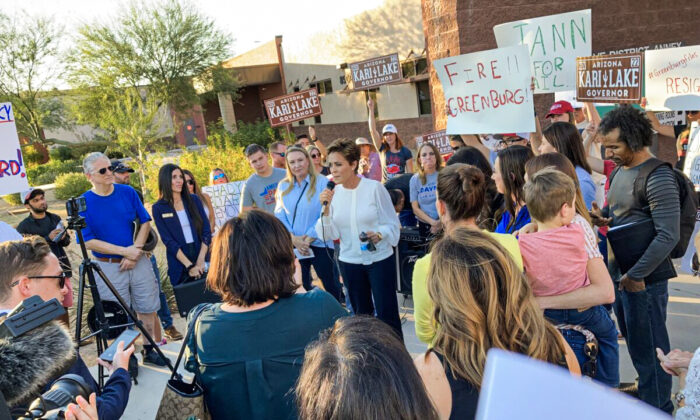 Kari Lake, a Republican candidate for Arizona governor, speaks before a crowd of parents demanding the resignation of Scottsdale Unified School District Board member Jann-Michael Greenburg, on Nov. 15, 2021, outside of district offices in Scottsdale. Greenburg is accused of keeping an online dossier on parents who oppose board policies, such as Critical Race Theory and mask mandates. (Allan Stein/The Epoch Times)
US News

Arizona Attorney General Mark Brnovich has requested an immediate federal investigation into potentially unlawful misconduct by Scottsdale Unified School District Board member Jann-Michael Greenburg, who is accused of keeping an online dossier on parents opposed to controversial board policies.

“I urge the U.S. Department of Justice and the Federal Bureau of Investigation to immediately open an investigation into this matter,” Brnovich wrote in a Nov. 17 letter to U.S. Attorney General Merrick Garland and FBI Director Christopher Wray.

“Parents have a First Amendment right to assemble, and speak, in order to question the decisions public officials are making—especially when it involves the well-being of their children,” wrote Brnovich, a Republican.

Neither the FBI nor the Justice Department were available for immediate comment.

On Nov. 15, the school board voted to replace Greenburg, 27, a Scottsdale attorney, as president. Patty Beckman was chosen to take over the position.

Greenburg said he will remain on the board until “all the facts” are known.

The Scottsdale Police Department is currently investigating the matter. Meanwhile, the school board is conducting an independent forensic investigation to determine whether Greenburg used district resources to create the dossier.

“It has been revealed that Jann-Michael Greenburg had in his possession a dossier stored on a Google Drive that contained parents’ and students’ information,” Brnovich wrote.

“The full extent of the dossier/Google Drive contents, including other confidential or personal information, is not publicly known,” he said.

The so-called Greenburg dossier was allegedly kept by Mark Greenburg, Jann-Michael’s father, and inadvertently shared by the latter. Mark Greenburg isn’t mentioned in Brnovich’s letter, however.

“There is no place in America, under fundamental concepts of liberty, wherein parents should be surveilled, threatened, and intimidated for asserting their constitutional rights and raising concerns about their children’s education,” Brnovich said.

Not only are governments—and school boards—prohibited from depriving a person of a constitutional right, he said, “a dossier containing information on those who wish to participate in their children’s education and peacefully petition their government should concern all Americans of good conscience.”

Brnovich alluded to a “disturbing trend” in the United States involving school boards encroaching on the rights of parents.

“There should be zero tolerance of this activity in our school districts and, considering our AG is investigating, warrants the seriousness of this matter,” said Arizona state Rep. Joseph Chaplik, a Republican who represents District 23, which includes Scottsdale, Fountain Hills, and Rio Verde.

“I strongly call for the resignation of any board members that were involved, or knew of this devious behavior, including the superintendent,” Chaplik told The Epoch Times. “The parents want to protect our schools, our community, and our children from this type of unacceptable behavior and will stay engaged until we make the necessary changes with stronger, ethical, and professional leaders.”

“Where my office has state law jurisdiction, there will be a rigorous inspection of this matter. If violations of law are found, enforcement action must be taken,” Brnovich said.

Sara Solem, a Scottsdale parent with two young daughters in the school system, said the online data contained personal family information, including photographs of her eldest daughter. She said she’s pleased with the prospect of a federal and state investigation of the alleged dossier.

“I’m very glad, as an SUSD community member and parent, that this matter is getting the attention that it deserves,” she told The Epoch Times. “This needs to be investigated at multiple levels, using different lenses.

“It goes back to intimidation. Trying to be involved parents, what we get is being intimidated, possibly harassed, and surveilled.”