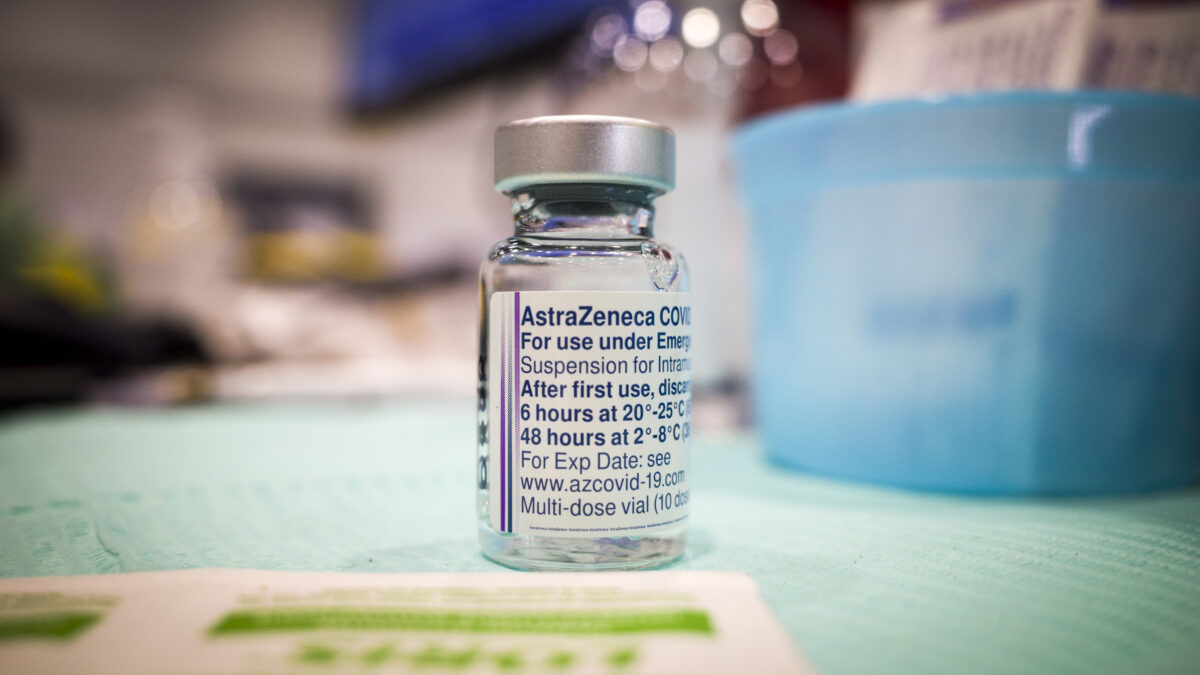 A vial of AstraZeneca vaccine is seen at a mass COVID-19 vaccination clinic in Calgary, Alta., on April 22, 2021. (The Canadian Press/Jeff McIntosh)
Health Science

After people started receiving vaccinations for Covid-19, many side effects have gradually emerged, such as blood clots, myocarditis, and in more serious cases, deaths. In cases of death after vaccination, people usually hear experts say that the causes of death “have not been confirmed to be vaccine-related.”

However, the first “confirmed vaccine-related death” recently appeared in Taiwan, resulting in the highest-ever compensation of NT$6 million (approximately $210,000).

How can we determine whether symptoms or deaths after vaccination are related to the vaccines? In addition, the vaccines seem to have been effective at preventing severe illness for some, but have they also opened the Pandora’s Box, thus bringing negative effects?

The loss of life is heartbreaking, so it is necessary to investigate the cause of death. However, the association between vaccines and deaths is a very sensitive and complex issue that involves many aspects. Therefore, prior to determining the association, it is important to identify the characteristics of people who become ill after vaccination.

In the case of the AZ (AstraZeneca) vaccine, for example, two medical studies conducted in Germany and Norway respectively were published in the New England Journal of Medicine on April 9, 2021. The German study reported that 11 patients had developed rare, abnormal clinical manifestations of thrombosis after receiving their first dose of AZ vaccine, and six among them passed away. In the Norwegian study, five patients had developed thrombosis after the first dose, with three of them eventually passing away.

In one case of death reported by the German study, after receiving the first dose of the AZ vaccine, a 49-year-old previously healthy medical professional experienced fatigue, myalgia and headaches in the following several days. From day five onward, he had chills, fevers, nausea and abdominal pain. And on day 10, he became hospitalized, and his blood platelet count dropped to 1/6 of the lower limit of the normal count, and his blood became hypercoagulable. A CT scan revealed multiple thromboses in his veins and arteries, including a pulmonary embolism and thrombosis in cerebral veins, the infrarenal aorta and two iliac arteries. In the end, he died after an unsuccessful treatment.

In the Norwegian study, three deaths were reported. The patients were all females aged 37 to 54, and they all became hospitalized seven to 10 days after vaccination. Their platelets dropped to 1/5 to 1/7 of the lower limit of the normal count, and their blood vessels showed significant hypercoagulability, as well as cerebral vein thrombosis.

Both the German and Norwegian teams agreed on the conclusion that this was a new side effect and coined it the “vaccine-induced immune thrombotic thrombocytopenia” (VITT).
In summary, these cases have four distinctive characteristics:

1. A significant prevalence among females
2. The median age is under 40 (36 to 39 years old)
3. The time of death occurred within one to two weeks (5 to 16 days) after the first vaccine dose
4. The main symptoms include headaches

The AZ vaccine differs from the mRNA vaccines. According to the journal Nature:

“A recombinant vaccine is a vaccine produced through recombinant DNA technology. This involves inserting the DNA encoding an antigen (such as a bacterial surface protein) that stimulates an immune response into bacterial or mammalian cells, expressing the antigen in these cells and then purifying it from them.”

3 Key Points to Determine Causality Between Deaths and Vaccines

So, how do we know that a death was caused by vaccination?

To determine the causal relationship between a type of treatment and a death, at minimum, the three key points below must be analyzed:

1. Time between vaccination and death: The shorter the timeframe, the stronger the correlation. One to three days would imply a strong correlation, within one to two weeks a moderate correlation, and after one month, there is minimal correlation.

3. Exclusion of confounding factors: Is there a chronic disease, medication, or other trigger for the event?

In Taiwan’s first case, where a vaccine-induced death was compensated, the patient was a woman in her 50s. The timing of the onset of her blood clot after receiving the AZ vaccine coincided with the findings published in the New England Journal of Medicine. In addition, the immediate cause of her death was “thrombosis with thrombocytopenia syndrome,” resulting in brain infarction, elevated cerebral pressure and subsequent death from cerebral hemorrhage. Furthermore, she was in good health prior to the AZ vaccination and had no history of disease or chronic illness and was not taking medications that could have caused her death.

After analyzing the case against the three criteria, Taiwanese experts determined that her death was vaccine-related, so it was only natural that the authorities should pay compensation.

Why does the AZ vaccine cause platelet drop and thrombosis?

A team of scientists from Cardiff University in the UK, Arizona State University, and AstraZeneca published an article in the journal Science Advances, explaining the “trigger” for this very rare side effect. The key, they believe, lies in the vector used by the vaccine.

The AZ vaccine uses a modified chimpanzee adenovirus as a vector, which attracts platelet factor 4 (PF4), a protein in the human bloodstream, to induce a chain reaction that ultimately leads to thrombosis. In contrast, the Janssen (Johnson & Johnson) vaccine uses a safer human adenovirus vector, Ad26.

The team used a technique called cryo-electron microscopy to take molecular-scale images of the adenovirus. They found that the surface of AZ vaccine’s adenovirus acted like a magnet, attracting PF4 to it (red dots on the left) and the binding is more frequent than the Ad26 used in the Janssen vaccine. Furthermore, the data confirmed that the AZ vaccine’s adenovirus surface is negatively charged, while PF4 is positively charged, and that the two can bind well due to the principle of positive and negative attraction.

Such a conjugate is tantamount to a trigger that pushes down the first domino—the body’s immune system mistakes PF4 for part of a foreign adenovirus and starts to generate antibodies against it, causing platelet depletion. Eventually, the antibodies and PF4 clump together, triggering thrombosis.

However, many details regarding the mechanism of thrombosis formation have yet to be confirmed by additional studies. In addition, there are still many unanswered questions. For instance, why are some people more likely to develop blood clots than others? Why are blood clots most often found in the veins of the brain and liver? All of these questions need to be further clarified.

Besides the AZ vaccine, there have also been reports of deaths related to other vaccines.
In October 2021, the Journal of Korean Medicine reported a case, in which a 22-year-old male developed chest pain five days after his first dose of Pfizer mRNA vaccine (BNT) and then died seven hours later. His cardiac biopsy showed multiple areas of myocarditis and extensive necrosis (yellow arrows in Figure B and D).

The time between his vaccination and death was quite short, and he showed symptoms consistent with the characteristics of the Pfizer vaccine side effects, with no other confounding factors. Therefore, researchers determined that his death was related to the BNT vaccine.

In addition, according to the World Health Organization’s own report, 162 serious adverse events have been reported after the Covid-19 vaccine developed by China’s Sinovac Biotech was sold in Brazil and Indonesia, including fevers, respiratory distress, headaches, and 16 cases of death. This report does not provide detailed medical records, so it is impossible to determine the causal relationship between the vaccine and these adverse events.

In June 2021, according to a Hindustan Times’ report, the Indonesian Medical Association confirmed that at least 20 doctors in Indonesia had died after receiving the Sinovac vaccine, which was manufactured in China.

Some deaths related to other vaccines have not been officially reported in professional medical journals, but that does not mean that they don’t exist. There are many reasons for the lack of published materials, as such reports would involve a variety of sensitive topics and many parties, including medical institutions, governments, and pharmaceutical companies.

Dr. Yuhong Dong
Follow
Dr. Yuhong Dong, a medical doctor who also holds a doctorate in infectious diseases, is the chief scientific officer and co-founder of a Swiss biotech company and former senior medical scientific expert for antiviral drug development at Novartis Pharma in Switzerland.
SHARE
Friends Read FreeCopyFacebookTweet
You May Also Like