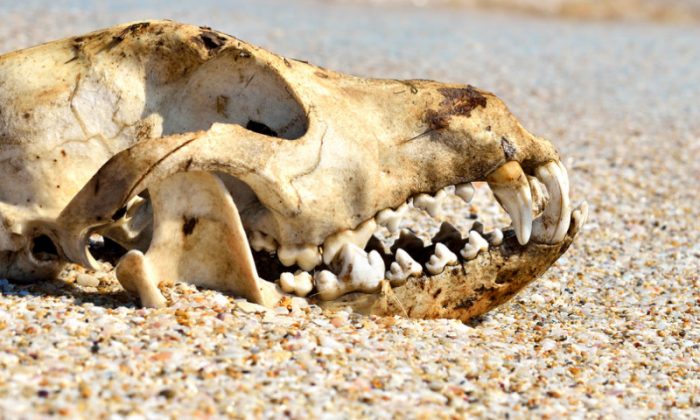 A file photo of a dog skull. (Shutterstock*)
archaeology

Archaeologists have discovered the skeleton of a massive dog that would have stood 7 feet tall on its hind legs, in the ruins of Leiston Abbey in Suffolk, England, according to a news report in The Express.  The remains are near where an ancient legend spoke of a hellhound called Black Shuck, said to have flaming red eyes and a rugged black coat, who terrorized villagers.

The name Shuck derives from the Old English word scucca meaning ‘demon’. He is one of many ghostly black dogs recorded across the British Isles. Its alleged appearance during a storm on 4th August, 1577 at the Holy Trinity Church, Blythburgh, is a particularly famous account of the beast, in which legend says that thunder caused the doors of the church to burst open and the snarling dog crashed in and ran through the congregation, killing a man and a boy, before it fled when the steeple collapsed. The encounter on the same day at St Mary’s Church, Bungay was described in ‘A Straunge and Terrible Wunder’ by the Reverend Abraham Fleming in 1577:

“This black dog, or the devil in such a likeness (God he knoweth all who worketh all,) running all along down the body of the church with great swiftness, and incredible haste, among the people, in a visible form and shape, passed between two persons, as they were kneeling upon their knees, and occupied in prayer as it seemed, wrung the necks of them both at one instant clean backward, in so much that even at a moment where they kneeled, they strangely died.”

Brendon Wilkins, projects director of archaeological group Dig Ventures, said: “Most of these legends about dogs may have some roots in reality.”

The remains of the massive dog, which is estimated to have weighed 200 pounds, were found just a few miles from the two churches where Black Shuck killed the worshippers. It appears to have been buried in a shallow grave at precisely the same time as Shuck is said to have been on the loose, primarily around Suffolk and the East Anglia region.

Radio carbon dating tests will be carried out to give an exact age for the bones, which will either serve to enhance the hell hound stories, or support the far less exciting theory that it is an abbot’s old hunting dog. Regardless of the outcome, it is unlikely to change the iconography of the local area, which relies on stories of Black Shuck to attract curious visitors.

*Photo of a dog skull via Shutterstock