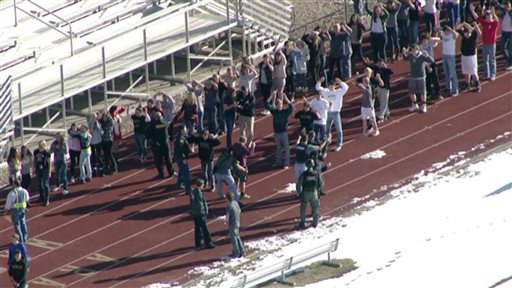 In this still image taken from video provided by Fox 31 Denver, students gather just outside of Arapahoe High School as police respond to reports of a shooting at Arapahoe High School in Centennial, Colo. Friday, Dec. 13, 2013. The suspected gunman killed himself after injuring two students, the county sheriff said. (AP Photo/KDVR)
US

Arapahoe County Sheriff Grayson Robinson said the shooter entered Arapahoe High School in Centennial armed with a shotgun and looking for a teacher he identified by name.

The shooter was mad because a teacher had penalized him several days ago, friend Frank Warnoff told KDVR.

The teacher immediately left the school when he learned the student was looking for him, Robinson said.

“He was a good person. People make mistakes,” Warnoff said, referring to the shooter, who has been identified as Karl Pierson.

Alex Chapman, a senior at the school, told CBS that he heard four gunshots and he and other students, and staff, ran into a classroom and locked the door. They were later evacuated by police.

Parents of students have been told to go to Shepherd of the Hills Church at 7691 S University Blvd. to wait for their children to be released, the Arapahoe Sheriff’s Office said.

Arapahoe is located at 2201 East Dry Creek Road in Centennial, which is a suburb of Denver, and is part of the Littleton Public Schools.

The school has approximately 2,200 students.

The school is about 8 miles east of Columbine High School in Littleton, where two teenage shooters killed 12 classmates and a teacher before killing themselves in 1999.

The shooting also came a day before the first anniversary of the school massacre in Newtown, where a gunman killed 20 children and six adults at Sandy Hook Elementary School.

All schools in Littleton, Aurora, and Douglas County were on lockdown because of the situation.