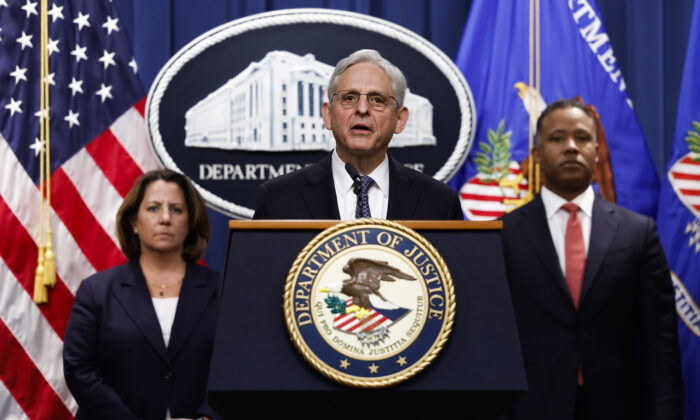 While the Republicans kicked off the 2024 presidential race with the announcement that former President Donald Trump was again running for president, in perhaps the ultimate sign of our ignominious times, the Democrats, in effect, kicked off their half of the contest three days later by appointing a special counsel to escalate their political prosecution of him.

This is where “our democracy” stands today: with its purported defenders engaging in the singularly anti-democratic act of siccing a hyper-politicized law enforcement apparatus on a candidate for the highest elected office, on dubious grounds, thereby subverting the political process by which we decide who represents us.

At a minimum, no doubt to an approving President Joe Biden, his law-enforcement arm is now engaged in what amounts to election interference against arguably the president’s top challenger—ironically probing in part Trump’s alleged interference with the transfer of power in 2020, when Trump could make the case that the deep state did the same to him from the inception of Russiagate in 2016 onward.

Worse, with Attorney General Merrick Garland’s appointment of Jack Smith as special counsel, the prospect of the former president being charged and convicted of something, anything, is more real than at any time during the perpetual campaign to purge Trump from the body politic.

Our ruling class really does wish to “lock him up,” or at least hold that threat over the former president’s head for maximum political gain.

There are many layers to the surreal lawfare assault on Trump worth peeling back—all of which point to the fact that our core institutions are willing to burn themselves down in service of their own power and privilege.

For starters, we have the inherent third-world nature of the current president, by way of his attorney general, pursuing criminal charges against his predecessor and present challenger. This is an extension of the third-world, Soviet show-trial-style Jan. 6 committee preceding it. The law enforcement apparatus carrying out the investigations has time and again acted, third world-like, as the ruling class’s sword and shield. Such third-worldism in our politics—weaponizing the national security and law enforcement apparatus against ruling-class foes—has now been normalized and institutionalized.

Next, there are the beyond-dubious grounds on which the Department of Justice’s (DOJ) legal pursuit is putatively based. No Justice Department has ever pursued such probes, on such grounds, concerning such debatable charges, under such circumstances as this one. The 2024 presidential election may hinge in large part on what case(s) the DOJ can make over a document dispute—as even federal law enforcement has acknowledged is at issue with the Mar-a-Lago materials—and the manner in which a president contested an election.

Setting aside for a minute the contempt with which the DOJ and FBI have treated Trump time and again, looked at on the merits, the agencies have punted far more clear-cut cases concerning the handling of documents by officials with far less authority than the commander-in-chief. To my knowledge, there is little if any guidance on what constitutes “unlawful interference” with the transfer of power, or election certification—meaning, at very best, the DOJ is dealing in hypotheticals and unique matters of interpretation. In other words, the grounds for legal pursuit of Trump by his successor’s administration are shaky and the cases to be made are novel, to put it mildly.

If federal prosecutors—starting with the attorney general—acted with even a modicum of discretion, they would have immediately dismissed even the thought of pursuing anything but open-and-shut cases, overwhelmingly supported by law and precedent, when it comes to prosecuting a former president and current candidate. Instead, by characteristically holding Trump to a different standard than any president to come before him, our preeminent law-enforcement agencies are undermining the rule of law.

Another aspect of the story is Garland’s artful attempt to insulate himself from an inherently hyperpolitical prosecution that the DOJ initiated in the first place, and that he ultimately calls the final shots on anyway—and all while the president’s son, not to mention other family members, who monetized patriarch Joe’s office through dealings with our worst adversaries, face no special counsel. Talk about a double standard.

Then there’s Smith’s checkered record in spearheading past baseless pursuits of Republicans during his time as the head of the Obama-era Justice Department’s public integrity section. His office’s reckless prosecution of former Virginia Gov. Bob McDonnell on bribery charges led to an embarrassing rebuke at the Supreme Court, which overturned the Republican’s conviction by a nine-to-nothing vote. The special counsel has also been implicated in the IRS’s targeting of conservative nonprofits during the Obama years.

And then, of course, there’s the myriad ways the prosecution can and will be exploited to hobble candidate Trump, cast a cloud over the GOP primary process, stymie congressional Republicans likely to probe aspects of Jan. 6, 2021, and perhaps the DOJ and FBI themselves, and sideline those members involved in contesting the 2020 presidential election—all while distracting from the Biden administration’s misdeeds.

Lastly, there’s the precedent this all sets.

Those who loathe Trump, his policy, and his people, have proven they are willing to eviscerate the U.S. system in the name of defending it from traitors, authoritarians, and insurrectionists.

Their projection is reaching its apex.

Should it persist, we will be an unrecognizable country.