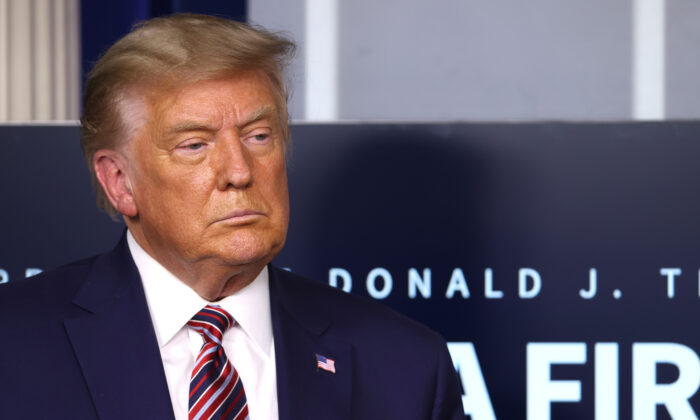 President Donald Trump looks on during a briefing in the James Brady Press Briefing Room at the White House in Washington on Nov. 20, 2020. (Tasos Katopodis/Getty Images)
Pennsylvania

President Donald Trump’s campaign on Monday secured a legal win after the U.S. Third Circuit Court of Appeals granted an expedited review of their appeal from a Pennsylvania court, according to Trump campaign lawyer Jenna Ellis.

According to the order, Trump’s “motion for emergency expedited review is granted at the direction of the court.”

Their brief now needs to be filed by 4 p.m. on Monday, Nov. 23. “The court will advise if oral argument desired,” it said.

Pennsylvania’s 67 counties are scheduled to certify their election results by the end of Monday before sending them to state election officials.

Over the past weekend, Judge Matthew Brann dismissed the campaign’s lawsuit, which had sought to throw out hundreds of thousands of votes in Pennsylvania, saying that election officials in Philadelphia and other Democratic-leaning counties violated the equal protections clause under the U.S. Constitution. They alleged that those counties allowed voters to “cure” mail-in ballots that had issues, while GOP-leaning counties followed the law and didn’t alert voters about potential issues with ballots.

Brann, an appointee of former President Barack Obama, ruled Saturday that he “has no authority to take away the right to vote of even a single person, let alone millions of citizens.” The order allowed Pennsylvania to move forward with certifying the results of the Nov. 3 election. Current data shows that Democrat Joe Biden is ahead of Trump by around 80,000 votes in the Keystone State.

On Saturday, Ellis and fellow Trump attorney Rudy Giuliani welcomed Brann’s dismissal of the lawsuit, saying that the move would allow them to move their legal challenge to the U.S. Supreme Court.

“Today’s decision turns out to help us in our strategy to get expeditiously to the U.S. Supreme Court,” their statement said.

Trump, meanwhile, criticized Brann of acting in a partisan manner.

“It’s all a continuation of the never ending Witch Hunt,” he wrote on Twitter. “Judge Brann, who would not even allow us to present our case or evidence, is a product of Senator Pat ‘No Tariffs’ Toomey of Pennsylvania, no friend of mine, & Obama – No wonder,” Trump said on Twitter, adding that he “WILL APPEAL.”

Last week, a math professor who specializes in analytic number theory wrote in a sworn affidavit that he flagged up to 100,000 ballots in Pennsylvania of potential fraud.

“I estimate that the number of ballots that were either requested by someone other than the registered Republican or requested and returned but not counted range from 89,397 to 98,801,” Miller said in the sworn statement (pdf), according to Just The News.