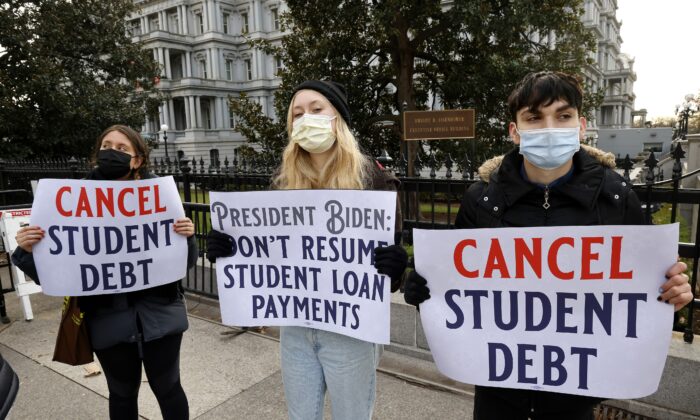 Activists call on President Biden to not resume student loan payments in February and to cancel student debt near The White House on December 15, 2021 in Washington, DC. (Photo by Paul Morigi/Getty Images for We, The 45 Million)
By Tom Ozimek

“Despite the administration being unlikely to prevail on the merits of this case, it had hoped to allow the program to move forward so that it could get money out the door to debtors and claim victory,” she continued.

Parker added that only by succeeding on appeal and permanently blocking Biden’s student debt bailout will the JCNF consider its initiative a success, adding that the advocacy group will continue to “strongly fight the Biden administration’s attempt to restart its illegal student loan bailout program.”

The White House had no immediate comment but the administration has said that if the 5th Circuit declined to halt the Texas judge’s order blocking the student debt wipeout, it would ask the U.S. Supreme Court to intervene.

The decision by Fort Worth, Texas-based U.S. District Judge Mark Pittman was one of two nationally that has prevented the Department of Education from pressing ahead with student debt relief to millions of borrowers.

The second was a Nov. 10 decision by the St. Louis-based U.S. Court of Appeals for the 8th Circuit, which froze Biden’s debt forgiveness plan, prompting the federal government to stop receiving applications.

Following the 8th Circuit court’s decision, the Biden administration filed an emergency appeal with the Supreme Court, seeking to overturn the ruling and reinstate the student loan forgiveness scheme.

After the Biden administration filed the appeal, a coalition of Republican-led states petitioned the Supreme Court to reject the appeal and keep the bailout scheme frozen until litigation around it is resolved.

In its filing to the Supreme Court (pdf), the Biden administration argued that the 8th Circuit court’s “erroneous injunction” would lead to a number of harms, including leaving “millions of economically vulnerable borrowers in limbo.”

The administration also suggested in the filing that the Supreme Court could bypass the 8th Circuit court and hear the case on an expedited basis. It also cited the national emergency declared because of the COVID-19 pandemic and provisions in the Heroes Act as justification for Biden’s executive decision to provide student debt relief.

But the GOP-led states—Arkansas, Iowa, Kansas, Missouri, Nebraska, and South Carolina—said in their Supreme Court petition that Biden’s request to lift the freeze is not justified by any “emergency or imminent harm” while lifting the injunction “risks unleashing on the States a wave of harms that could not be undone.”

The Biden administration has announced that it will extend its moratorium on student loan payments through the middle of next year, as the program faces court battles.

After student loan payments were put on hold in early 2020 under the Trump administration during the pandemic, payments were slated to resume on Jan. 1, 2023.

The Biden administration announced on Nov. 22 that it would extend the moratorium through June 30, 2023.