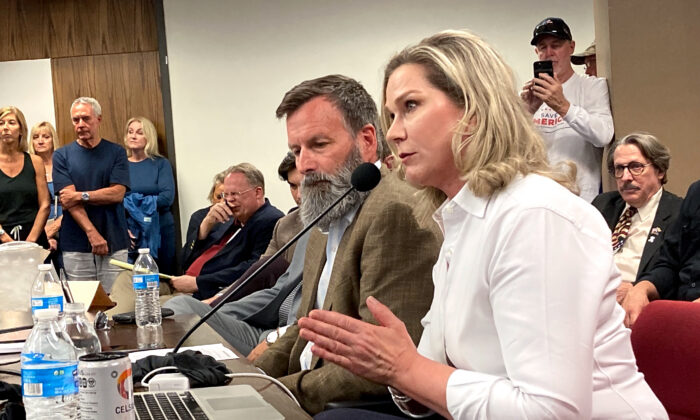 True the Vote founder and president Catherine Engelbrecht makes a point during a presentation on ballot trafficking at the Arizona statehouse on May 31, 2022. Seated next to her is True the Vote data investigator Gregg Phillips. (Allan Stein/The Epoch Times)
By Zachary Stieber

U.S. District Judge Kenneth Hoyt ordered Catherine Engelbrecht and Gregg Phillips of True the Vote jailed after he found them in contempt for not fully complying with a temporary restraining order that they, in part, reveal the identities of all persons who accessed information from Konnech, an election software firm.

Phillips named one of the people but he refused to name another, saying that the latter is an FBI informant. Engelbrecht said she thinks she knows who the person is but declined to identify the person.

The U.S. Court of Appeals for the Fifth Circuit later ordered the release of Engelbrecht and Phillips while declining to immediately rule on the contempt finding.

In the Nov. 22 ruling, a three-judge panel said Hoyt erred when he entered the order.

Hoyt also did not explain what emergency justified jailing the defendants for not revealing the identities, the panel said.

“Rather, the district court made clear that it was imposing its disclosure requirements because it—the district court—wanted to add defendants to the lawsuit. That is not how the Federal Rules of Civil Procedure work,” it said.

A party cannot be held in contempt for disobeying an invalid order and Hoyt’s order was invalid because it disregarded the normal order of operations imposed by the rules, according to the panel.

The restraining order has since elapsed and been replaced by a preliminary injunction. True the Vote has not yet appealed the injunction, so the panel did not rule on it. But is vacated the contempt order because it was premised on the restraining order. It also remanded the case back to Hoyt “for further proceedings consistent with the Federal Rules.”

“The Fifth Circuit’s powerful ruling lays bare the excesses of Konnech, their attorneys, and the lower court,” True the Vote told The Epoch Times via email. “Catherine and Gregg offer their profound gratitude to the Fifth Circuit’s vindication and are committed more strongly than ever to defending the integrity of American elections.”

In their request for a ruling, or writ of mandamus, Engelbrecht and Phillips said Hoyt erred because he entered the restraining order without any evidence from Konnech, which sued True the Vote and the leaders for defamation, and without allowing defendants to put forth all relevant evidence.

The order stemmed from Phillips viewing data believed to be from Konnech in a hotel room in 2021. Phillips has claimed that Mike Hasson, another FBI informant, obtained the data from servers in China.

Defendants said they fully complied with the order except for withholding the name of the second informant, who was never alleged to have accessed any of Konnech’s computers and who Phillips has said would be endangered by having their name made public.

Konnech opposed both the release of the defendants from jail and the vacating of the contempt order.

Lawyers for the firm said that defendants “have no one but themselves to blame for their confinement” and that they could immediately free themselves if they supplied the identity they were withholding.

In its opposition to the writ, Konnech added that Hoyt “correctly exercised his coercive contempt power and should be permitted to continue to use the coercive and compensatory contempt tools available to all federal judges to enforce his orders.”

Konnech also said that True the Vote leaders have shown no evidence that the person who is not being identified is an FBI informant and “have presented no evidence and cited no authority to warrant their refusal to disclose the individual’s identity.” The firm’s lawyers also noted that a lawyer for the defendants said during a hearing that the FBI was not interested in shielding the information.

“At bottom, the third person’s identity is needed to discover the truth about what really happened and remedy the situation,” the firm claimed.