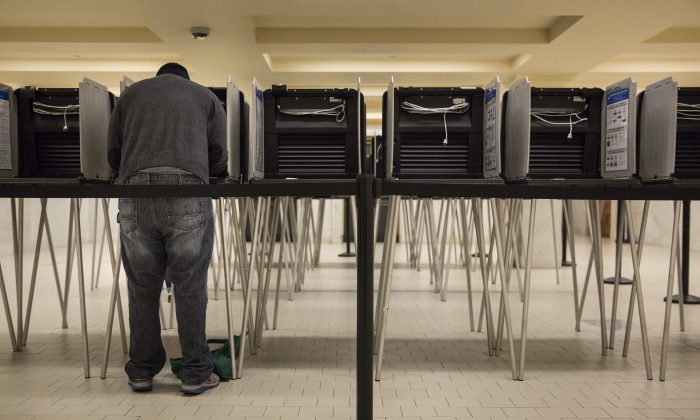 A man votes in the California primary at City Hall in San Francisco on June 7, 2016. (Andrew Burton/Getty Images)
Northern California

A California appeals court decision will effectively allow non-U.S. citizens to vote in San Francisco school board elections in November, despite a court ruling earlier this year that struck down the local law as unconstitutional.

California Superior Court Judge Richard Ulmer struck down the city’s ordinance allowing noncitizens to vote on July 29. However, the First District Court of Appeal in August granted a request by the city for a stay of the decision.

The appellate court then denied on Sept. 9 a request to expedite Ulmer’s ruling against San Francisco’s noncitizen voting law in time for the General Election.

“The constitutional challenges … are significant ones that are entitled to deliberate consideration,” according to the appeals court decision. However, the court “decline[s] to order an injunction. No extensions of time will be granted absent a showing of exceptional good cause.”

This means noncitizens can cast ballots in the Nov. 8 election, according to James V. Lacy, an attorney who filed a lawsuit against the San Francisco ordinance on behalf of conservative groups in March 2022.

Lacy told The Epoch Times that the procedural delay will harm election integrity and allow the counting of votes that a judge has already ruled are illegal.

“It puts a cloud on the election,” he said on Sept. 13. “At a time of very high skepticism in the general public about the integrity of our elections, what the court has basically done is undermining the credibility and the vote of the San Francisco election.”

San Francisco voters approved the ordinance that appeared as Proposition N on the 2016 ballot, and the law was set to expire on Dec. 31, 2022, until the city extended it indefinitely last year. Since it went into effect, noncitizens have been allowed to vote in at least four local elections, according to court documents.

According to deputy city attorneys, noncitizens may only vote in school board elections and are not given an opportunity to vote for any other office.

The underlying idea was to give noncitizen parents a say in who is elected to school boards but “the problem is that it is illegal,” Lacy told EpochTV’s California Insider host Siyamak Khorrami in an Aug. 24 episode. “It’s alarming that this ballot initiative even got on the ballot.”

Lacy contends that voting is a fundamental right of citizens only, and a cornerstone of democracy that should not be “tinkered with.”

The California Constitution clearly states that only U.S. citizens are allowed to vote in state and local elections, Lacy told California Insider at the time.

According to the constitution, “A United States citizen 18 years of age and resident in this State may vote.” However, attorneys for the city argued the “may vote” language doesn’t prohibit a local government to allow others to vote.

In his July 29 ruling, Judge Ulmer said that based on the same flawed logic, the city could argue that “children under 18 and residents of other states ‘may also’ vote in California elections, which our Constitution does not allow.”

He said the constitution uses the words “may vote” for good reason.

“Had it instead used the mandatory word ‘shall’ … resident citizens of age would be legally required to vote. Election laws in many nations make voting mandatory, but not the United States,” Ulmer said.

Catherine Engelbrecht of True the Vote, a national election integrity watchdog group, denounced the appellate court’s decision to deny the request for expedition.

“Name any other country in the world that would allow noncitizens to vote in their country’s elections. There isn’t one,” Engelbrecht told The Epoch Times on Sept. 13.

“The suggestion that noncitizen voting will only occur in local elections is like saying ballot drop boxes will only be used during pandemics. These efforts never stay limited or temporary,” she said via text message.