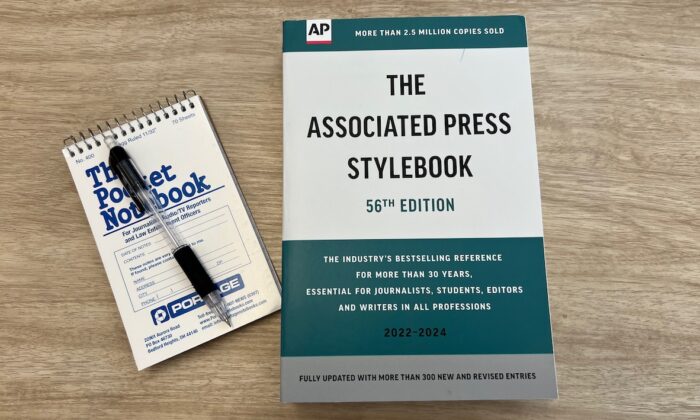 A copy of the Associated Press Stylebook and a reporter's pad in New York on July 27, 2022. (Epoch Times Staff)
Media & Big Tech

One of the world’s most influential newspaper writing stylebooks on July 22 advised against quoting people who use the word “groomer” to describe those who teach children about transgenderism, homosexuality, and other mature sexual issues.

The guidance is part of a lengthy transgenderism update by the Associated Press to its voluminous stylebook. Similar to other sensitive issues, AP’s new transgender guidance aligns with the language used by the political left.

For a major portion of the news media, the rules in the AP stylebook are the final authority when deciding which words and terms to use. With more than 1,000 newspapers and broadcasters using AP content often without citation, the guidance will promote the transgender agenda to millions of people who knowingly or unknowingly consume the wire service’s content.

The Associated Press (AP) wields an incredible amount of influence. On an average day, it publishes 2,000 news stories, 2,739 photos, and 191 videos.

Its stylebook  is the reason why many newspapers use “god” instead of “God,” “antisemitism” instead of “anti-Semitism,” and “Alexander Solzhenitsyn” instead of “Aleksandr.”

To keep this content consistent, it publishes the AP Stylebook, a manual of writing standards. But the AP Stylebook’s influence goes far beyond its original publication.

Many American newspapers, magazines, and public relations offices use the AP Stylebook and its guidelines as a writing standard.

“A basic knowledge of AP style is considered essential to those who want to work in print journalism,” according to grammar website the Purdue Owl.

“Phrasing like ‘is a woman’ is more to the point than ‘identifies as a woman,’” the AP guidelines read.

“Avoid terms like ‘biological male,’ which opponents of transgender rights sometimes use to oversimplify sex and gender, is often misleading shorthand for assigned male at birth, and is redundant because sex is inherently biological.”

The AP Stylebook now seems to suggest that there is nothing unusual about wearing the clothing of the opposite sex, injecting powerful hormones, and sex-change surgery.

“Do not use terms like ‘normal’ to describe people who are not transgender,” the style guide reads.

The guidelines also tells journalists not to call telling children about homosexuality, transgenderism, and other mature issues “grooming.”

It further advises reporters to not quote people using “grooming” in this context without saying their statements are “untrue.”

Mentioning a transgender person’s old name “can be akin to using a slur,” the stylebook reads.

Journalism authorities including the New York Times, Medium, The Conversation, and the Columbia Journalism Review have all praised skeptical journalism that checks sources instead of just believing them.

But the new AP Stylebook changes tell journalists not to imply doubt.

“Don’t use phrasing that misgenders people or implies doubt, such as former men’s swimmer or currently competes as a woman. Instead, formerly competed with men, current member of the women’s team …” the stylebook states.

Although The Epoch Times uses many AP stylebook guidelines, it differs from the stylebook on many issues.

According to Tim Graham, the executive editor of NewsBusters, the AP has long failed to be neutral, despite its role as the “Bible of journalism.”

“The Associated Press is in no way an objective or fact-based media outlet, based on its stylebook,” he said.

Graham noted that the AP Stylebook has also changed definitions to favor the pro-abortion movement, racial terms, and other topics.

He added that the change will probably most impact neutral journalists writing for outlets that use the AP Stylebook. Editors may not follow every AP Stylebook rule, but it often defines what is “conventional.”

“The media believes that if it always uses all the proper terminology that it will change the minds of the people,” he said.

“A stylebook used to be about how to most accurately portray what’s happening in the news. And I think that that’s vanished.”

Graham credited pressure from Left-wing activists including the Gay and Lesbian Alliance Against Defamation and National Lesbian and Gay Journalists Association for the change. Cultural trends also played a role, he said.

“They figure this is the way to win the culture war,” he said. “You go to the people who define the terms and pressure them incessantly to redefine the terms.”