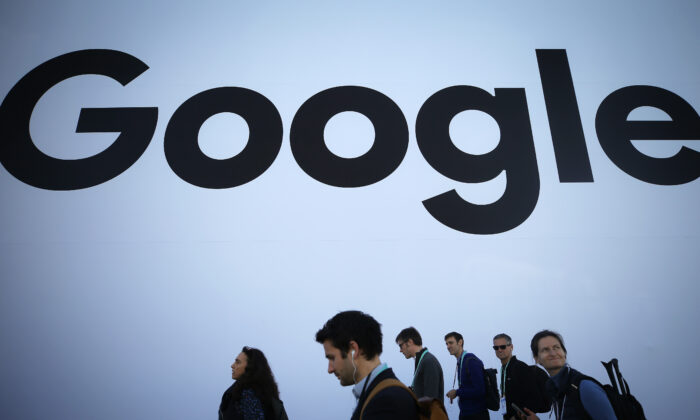 People walk past the Google pavilion at CES 2020 at the Las Vegas Convention Center on Jan. 8, 2020. (Mario Tama/Getty Images)
US News

A new Justice Department lawsuit against Google is worth pursuing, experts say, and marks the biggest antitrust case in a generation—comparable to the lawsuit against Microsoft Corp. filed in 1998 and the 1974 case against AT&T, which led to the breakup of the Bell System.

The suit, filed on Oct. 20 by the Department of Justice (DOJ) and 11 states, asserts that Alphabet Inc.’s Google has tried to maintain its status as a gatekeeper to the internet by using a number of interlocking businesses to shut out competitors, thereby securing itself as a monopoly.

The DOJ claims the company uses billions of dollars from its advertisements to pay carriers, browsers, phone companies, and other entities to maintain Google as a default search engine.

The lawsuit is styled in a similar fashion to the Microsoft case, and it certainly “has the potential to be that in terms of its scope and effect on American antitrust law,” according to Rebecca Allensworth, a law professor at Vanderbilt University and an expert on antitrust.

The suit makes the same basic argument made in Microsoft, that the dominant platform is using exclusive contracts and other means to keep rivals away from consumers, Allensworth said, adding that it’s “a strong suit” that has a “decent likelihood of success.”

“The complaint focuses on a simple story that fits neatly into existing antitrust doctrine, does not require the adoption of novel theories of competition law, and avoids a ‘kitchen sink’ problem of listing all the potential ways in which Google acts in anticompetitive ways,” she told The Epoch Times.

According to Allensworth, the suit will come down to two questions: does Google have monopoly power, and is the company using good business justifications for exclusive contracts and other practices that the DOJ alleges are “bad acts,” Allensworth said.

The potential breakup of Google has been a divisive issue among policy and antitrust experts. The lawsuit is also likely to take years to resolve.

“My belief is that Google does have monopoly power, but there will be a big fight about it,” Allensworth said.

Kent Walker, the SVP of global affairs at Google, rejected the premise of the lawsuit, calling it “deeply flawed” and said it “would do nothing to help consumers,” in an Oct. 20 blog post.

For the past year, the House’s antitrust subcommittee has been probing Google, Apple, Amazon, and Facebook to decide if a change is needed in America’s century-old antitrust laws, or even if the companies should be broken up because of their market power. The Federal Trade Commission is also reviewing one or more of the companies.

A partnership of 50 U.S. states and territories, led by Texas Attorney General Ken Paxton, has also been reviewing Google’s practices.

Banks said Google is the “biggest, the most powerful, and the most dangerous of the bunch,” referring to tech giants Apple, Amazon, and Facebook.

“DOJ is right to rein in the No. 1 threat to American democracy today,” he said.

Matt Berman, founder and CEO of Emerald Digital, a digital marketing firm, says Google’s dominance is so extreme that his business has “no option but to use Google platforms in order to compete.”

“Prime visibility on Google platforms is essential for our marketing clients,” Berman told The Epoch Times. “Google’s dominance in organic search means our clients must rank for organic search results, we must cleverly use Google pay-per-click ads, we must properly utilize Google My Business, and the list goes on.”

Currently, Google is a “one-stop-shop with incredible targeting,” Berman said, noting that any change when it comes to a potential break-up would have drastic effects—both positive and negative—on how his clients do business.

Digital privacy expert Ray Walsh at ProPrivacy.com, however, fully welcomed the action against Google, calling it a “massive win for consumers and businesses alike.”

“It is about time that U.S. authorities used the legal powers available to them to challenge the overt monopolies that Big Tech firms like Google are enforcing via their platforms,” he told The Epoch Times.

“Google’s position as gatekeeper to the internet stifles innovation, it suppresses opportunities, and it ensures that for any company to have profitable visibility in searches, Google must be allowed to take a cut.”

Walsh points out that in Europe, Google has already been hit with large fines for its anti-competitive practices.

Last year, the European Commission fined the company about $1.7 billion over alleged abusive practices in online advertising. The suit was the third billion-dollar antitrust penalty the commission has handed to Google over the past years.

The lawsuit also contended that Google’s agreements and allegedly monopolistic conduct have “accounted for nearly 90 percent of all general-search-engine queries in the United States as well as almost 95 percent of queries on mobile devices.”

Adam Rizzieri, chief marketing officer at Agency Partner Interactive, said the suit should have been “no surprise to people in my industry.”

Google and other big tech companies “are in the pockets” of many U.S. legislators, and they will use every resource to maintain the status quo, he told The Epoch Times.

Meanwhile, some have completely rejected the premise of the DOJ suit.

“The main implication of the antitrust lawsuit against Google is to brand the company as evil. However, I don’t see that at all,” RJ Huebert, managing principal at HBT Digital Consulting, told The Epoch Times via email.

Huebert said small businesses can benefit from using Google ads, which can help them gain an advantage in the marketplace. He said he sees Google as a helpful resource to individuals and businesses and as a place where everything you need to know is at your fingertips.

“You can’t beat the targeting with Google Ads—you hit the exact person you want while they’re searching with ‘high intent,'” he said.