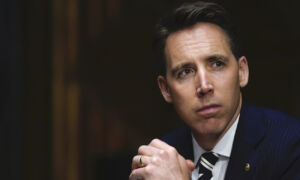 Antifa is both an ideology and a movement that uses intimidation and violence to oppose capitalism and anybody who disagrees with its far-left, anarchist political agenda, says journalist Andy Ngo, an expert on the anarcho-communist group.

In September 2020, FBI Director Christopher Wray described Antifa as more of an ideological movement than an organization.

“Antifa is a real thing. It’s not a group or an organization. It’s a movement, or an ideology may be one way of thinking of it,” Wray said, acknowledging that Antifa does have “small groups,” or “nodes.”

But Ngo told The Epoch Times in an interview with the “Crossroads” program that Antifa is “more than an idea. It’s also a movement.” It has networks of organizations, and some of them are organized into formal groups, he said.

One of its groups is Rose City Antifa, “the oldest Antifa organization in the U.S.,” which is based in Portland, Oregon, the epicenter of the movement’s violent activity, Ngo said.

Ngo has also uncovered a lot of evidence showing that Antifa is a formal organization, which he presented in his upcoming book “Unmasked: Inside Antifa’s Radical Plan to Destroy Democracy”

Antifa is extremely well-organized into secret cells and meeting locations, he said. Its training curriculum mirrors a lot of what is included in the radicalization process that jihadists put Muslims through, he said. It launches some events that look like social gatherings, such as soccer leagues, to recruit people and disseminate its extremist literature and later carry out riots, Ngo said.

Antifa has many chapters in different cities such as the Torch Network or Atlanta Antifa that “are formal groups,” he said.

Rose City Antifa states on its website that it works to oppose racial prejudice, bigotry, fascism, and fascist organizing.

Ngo said that Antifa doesn’t use the academic definition of fascism that refers to the national socialism of the Nazis or Italian Fascist Party. Antifa remade the definition of fascism for its own use by “describing it essentially as anything that is in opposition to the far-left political agenda,” Ngo said, adding that Antifa has always considered liberal democracy and capitalism as fascism.

For example, Antifa called both the Trump administration and the United States itself fascist, Ngo said.

The original Antifa was established during the interwar years in Germany as a “paramount tree of the German Communist Party,” Ngo said. In East Germany, Antifa’s ideology was institutionalized into the formal ideology of the German communist state; he noted that the Berlin Wall was officially called “the anti-fascist defense barrier.”

Antifa works together with socialist and communist groups such as the Democratic Socialists of America (DSA) because they have a common enemy in the United States, its institutions, civil society, and free markets.

The DSA, America’s largest socialist organization, is in reality a communist organization, according to Trevor Loudon, an author and filmmaker who has been researching radical Marxist and terrorist groups and their covert influence on mainstream politics for more than 30 years.

Antifa and communist organizations have ultimately different agendas, but currently have enough in common to work together, Ngo said. It’s that same type of coalition that was built throughout 2020 between Antifa and Black Lives Matter (BLM)–a movement founded by militant communists, he said.

The communist goal to establish a totalitarian state is in contradiction to the anarchist aspect of Antifa’s agenda, but for now it has partnered “in calling for the end of American criminal justice system, demonizing free markets, demonizing property ownership,” Ngo said.

The ultimate agenda of Antifa is to abolish nation states all around the world and to create anarchist, communist communes, Ngo said.

“They believe that they can actually organize society without a government,” he said.

One principle shared by Antifa and communists is that nobody should own private property.

Although “it sounds like a big wild fantasy that [Antifa] will never achieve,” Ngo said, Antifa was actually able to claim territory in the United States in 2020 by establishing the Capitol Hill Autonomous Zone (CHAZ) in Seattle.

Ngo, who spent some time there, said “it was a lawless area.” Homicides, arsons, shootings, and sexual assaults occurred in the zone. Warlords competed with each other, a hard border was created, and armed volunteers guarded it.

“They thought that they didn’t need capitalism to function,” Ngo said, but the zone was only able to sustain itself only because of donations from the United States as restaurants and people provided food and supplies.

Antifa uses the tactic of terrorizing its targets through a sustained onslaught of intimidation, which includes publicly releasing one’s personal information such as private addresses, place of employment, employer contact information, and phone numbers, a practice known as doxing, Ngo said.

The goal is to fill a person with dread that they can be attacked from anywhere, he said.

Ngo himself was physically attacked by Antifa in June 2019. Antifa members beat and robbed him, and hurled cups of cement mixed into milkshakes at him. As a result of this assault, Ngo suffered a brain injury and was hospitalized.

Ngo said that he’s had to undergo various therapies and treatments to address his injuries, but to this day he has not received any justice.

Ngo expressed sympathy for the store, a family-owned business, because he knows that Antifa is good at following through on its threats. It has a record of setting businesses on fire or initiating looting.

Despite these incidents and other threats, Ngo continues to expose Antifa because he wants to provide this information to a wider audience.

He said he hopes the information he provides helps “those in law enforcement to actually begin to seriously work on systematically dismantling these [Antifa] networks, and more importantly, also to challenge the ideology that they are polluting the minds of people with.”