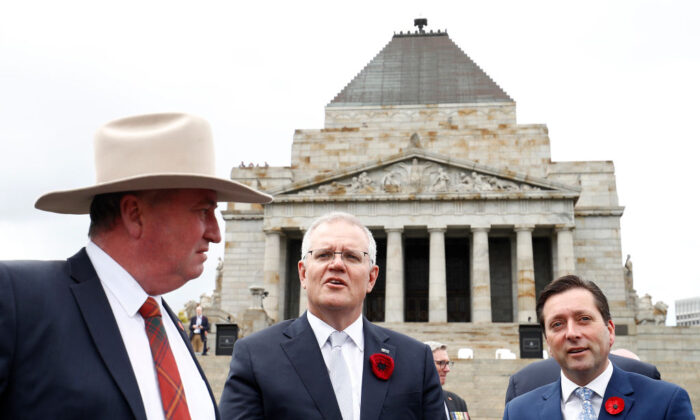 Australians Should Not Demonise Those Who Refuse COVID-19 Vaccine: Prime Minister

Australian Prime Minister Scott Morrison said that he respects people’s choices, and those who refuse to get a COVID-19 vaccine should not be demonised in the country.

“We don’t have a mandatory vaccine policy as a Federal Government. That’s not something that we have done. We respect people’s choices,” Morrison told the Seven Network on Thursday.

“We live in a country where we are not going to go around demonising those who want to make their own choices.”

The Prime Minister also attributed the country’s high vaccination rate to the people.

“New South Wales (NSW) is now 90 percent double-dose. Victoria will soon be there. We have other states that have had less COVID now 80 percent up in Queensland (have had) … their first doses. We’ll hit 90 percent first dose this weekend for the whole country.”

“We got there because we’ve just trusted Australians. They know what they need to do,” he said.

Morrison’s comments were a response to former state Premier Bob Carr’s call to strip those who have chosen not to get a COVID-19 vaccine of Medicare reimbursements if they are infected with the virus and go to the hospital.

“Follow Singapore and legislate no medical or hospital expenses to be reimbursed to people who are not vaccinated without medical justification and then contract COVID,” Carr wrote in a thread of posts on Twitter on Nov. 9.

“You ignored warnings and got the disease. You pay for your wilful stupidity, not the rest of us.”

“This should be enforced as we enforce smoke-free work environments or no driving while drunk,” the former premier added in a further post on Twitter on Nov. 10.

Morrison also said Carr’s comments were a “heavy-handed approach” and noted that is not how his government sees it.

“Of course, we want people to get vaccinated, but we are not going to take that heavy-handed approach, which the Labor Party just always seems to like doing,” Morrison said.

However, while the Australian federal government doesn’t have a mandatory vaccine policy, several state governments, such as New South Wales, Western Australia and Victoria, have mandated vaccines for entering services like retail and hospitality.

Queensland has also announced it will ban those who have chosen not to get a COVID-19 vaccine from venues after the state reaches 80 percent fully vaccination rate.

Meanwhile, Western Australia’s government has announced that it will launch vaccine passports once the state hits the 90 percent rate for complete vaccinations for people aged 12 and above.