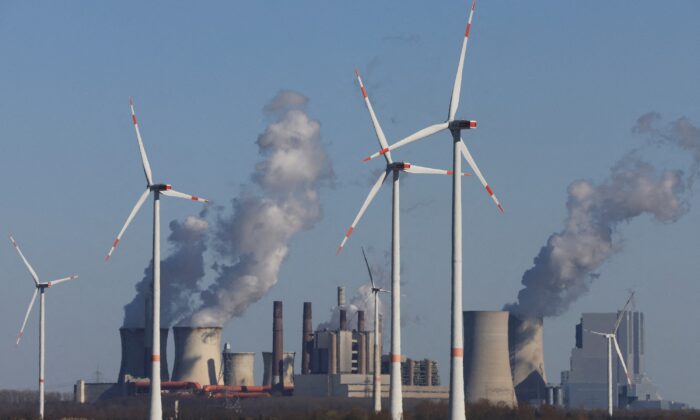 Only a few years after declaring that “climate risk is investment risk” and mandating corporations to meet certain environmental standards, Larry Fink, chairman and CEO of BlackRock, is facing growing resistance. Even the most ardent champions of sustainable investing are experiencing a rude awakening.

Fink, who leads the world’s largest asset management firm, announced in his 2020 letter to clients that he would place sustainability at the center of his investment strategy and reduce investment in fossil fuels.

Last month, Fink spoke about his company’s role in the green-energy transition at a Clinton Global Initiative event, which garnered him praises from former President Bill Clinton.

Fink stated: “The tectonic shift is happening. … We’re seeing evidence every day that climate risk is investment risk. And people are waking up to that.”

But not everyone in the investment community agrees. For example, Ohio-based Strive Asset Management has started a crusade against the world’s leading asset managers that push for sustainable investing, often known as environmental, social, and governance (ESG) investing.

The firm, co-founded by Vivek Ramaswamy and Anson Frericks this year, has become the most prominent advocate of the anti-ESG movement.

In August, Strive launched its first index fund, the U.S. Energy ETF (DRLL), which invests in the U.S. energy sector. In the first couple of weeks of trading, the fund has attracted more than $300 million, which the Financial Times describes as “an eye-catching success.” So far, other “anti-woke” ETFs have struggled to surpass $25 million in assets, the newspaper said.

The early success of Strive’s energy ETF marks a new era in the anti-ESG movement.

On Sept. 20, Strive announced the creation of its second index fund, the Strive 500 ETF (STRV), which invests in large U.S. corporations.

“We’ve been very excited about the amount of enthusiasm,” said Frericks, adding that the startup will continue to launch more funds over the next couple of months.

“We’re bringing a lot of the shortcomings of the ESG movement to the public’s view,” he told The Epoch Times.

According to its founders, Strive intends to leverage the power of shareholder votes to mandate corporations to prioritize profits over political agendas. They have been criticizing the three largest asset managers—BlackRock, Vanguard, and State Street—for breaking their fiduciary duties by putting too much emphasis on climate change and “stakeholder capitalism” instead of higher returns.

The Big Three funds manage collectively about $20 trillion worth of assets and exert “hidden power” on corporate boards because of their voting rights. For example, they owned more than 21 percent of Exxon Mobil Corp. as of June.

A Broad Stand Against ESG Investing

The anti-ESG investment community asserts that U.S. energy corporations have underinvested in oil and gas production, in part because of ESG rules imposed by these asset managers. And the insufficient investment, they claim, has caused a global shortage of energy and inflation this year.

Not only investors, but also U.S. lawmakers, governors, state treasurers, and legislators, have taken a stand on ESG investing as a result.

Tariq Fancy, BlackRock’s first global chief investment officer for sustainable investing from 2018 to 2019, warned about the ESG movement and called it a “dangerous placebo that harms the public interest.”

Jamie Dimon, JPMorgan Chase CEO and a prominent advocate of ESG, recently acknowledged the necessity to invest in the fossil fuel industry. When asked by Rep. Rashida Tlaib (D-Mich.) whether his bank would stop financing new oil and gas projects during a congressional hearing on Sept. 21, Dimon responded, “Absolutely not, and that would be the road to hell for America.”

“We aren’t getting this one right. The world needs 100 million barrels effectively of oil and gas every day. And we need it for 10 years,” he said during the hearing, adding that the current energy crisis has caused emissions to rise because of the increased usage of coal.

A March report by the Harvard Business Review revealed “an inconvenient truth” about ESG funds. Not only did ESG portfolios have poor financial returns but they also had a “worse compliance record for both labor and environmental rules,” the report stated.

Nonetheless, capital flows to sustainable investing have broken record after record. ESG assets globally are estimated to reach $55 trillion in 2022, and are on track to account for half of all professionally managed assets globally by 2024, according to consultancy firm Deloitte.