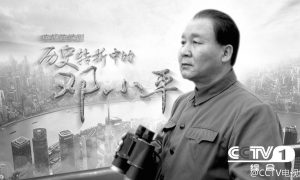 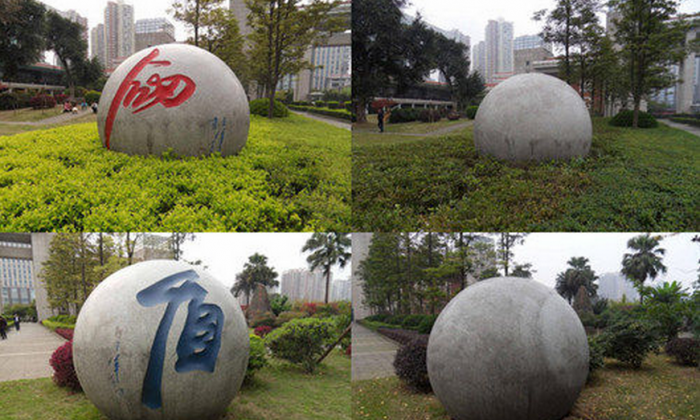 Following the formal announcement on July 29 of the investigation into former Chinese security czar Zhou Yongkang, Zhou’s inscription at his alma mater China University of Petroleum was immediately blocked by a large model rocket. The university also quickly deleted all reports related to Zhou on its website.

The Xinhua report said blocking the official inscription is a mild way of dealing with suddenly troublesome inscriptions. Some other sacked officials’ inscriptions have been taken down.

For instance, Wang Lijun, former vice mayor and head of Public Security Bureau in Chongqing, once had inscriptions for the characters of “sword” and “shield” on two large rocks located outside the Chongqing Public Security Bureau. Soon after Wang was sentenced to 15 years in prison for abuse of power, bribe taking, defection and “bending the law for selfish ends,” Wang’s inscriptions on the two rocks were blasted off.

The report about official inscriptions caused many netizens to think of Jiang, because he is well-known as the official who gave the most inscriptions, leaving them all over China, including at universities, hospitals, places of interests, and even on stamps, and so on.

For instance, an anonymous netizen remarked, “There’s an official who loves to give inscriptions. It won’t take very long for people to be busy … [taking off the inscriptions].”

Days after Zhou’s downfall, rumors of Jiang’s inscriptions being taken down at different places started to spread on the Chinese Internet.

Netizen “Bingxuan 1996” posted on Aug. 6, “Jiang Zemin’s inscription on 301 Military Hospital in Beijing was taken down yesterday afternoon! The happy time is coming soon!” A photo shows workers taking off the name of Jiang Zemin on the wall of a large building, with most of the inscription missing.

These posts about the removal of Jiang’s inscriptions were all soon deleted from the Internet under China’s Internet censorship.