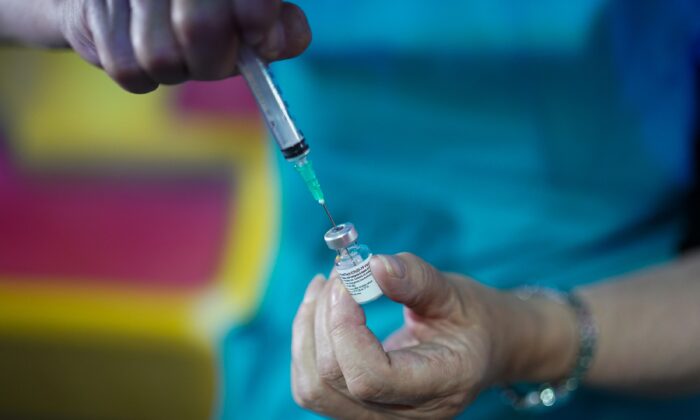 A doctor prepares the Pfizer-BioNTech COVID-19 vaccine at a vaccination center in Halifax, England, on July 31, 2021. (Ian Forsyth/Getty Images)
By Zachary Stieber

The effectiveness of the Pfizer and AstraZeneca COVID-19 vaccines turns negative against severe COVID-19 months after administration, according to a new study.

Pfizer and AstraZeneca didn’t respond to requests for comment.

Researchers reached the estimates by analyzing health records from roughly 12.9 million people in England, Scotland, Wales, and Northern Ireland. The study period was from Dec. 8, 2020, to June 30, 2021—one of the reasons that boosters, which weren’t available until later in 2021, weren’t included.

Steven Kerr, a senior research fellow at the University of Edinburgh’s Usher Institute, and the other researchers theorized that the negative estimates stemmed from behavioral differences between vaccinated and unvaccinated populations.

“We believe that the most likely explanation … is that vaccination caused recipients to believe they were protected, leading them to change their behaviour in ways that increase their chance of contracting the infection,” they wrote. “These changes in behaviours should initially have been outweighed by the protection offered by the immune response stimulated by the vaccine, but as time progressed the protection is likely to have diminished such that the impact of behavioural changes may have become dominant.”

The researchers provided no evidence for the theory.

The group also stated that it’s possible that the protection one enjoys after recovering from COVID-19 may have played a role, pointing to one of many papers that have concluded that natural immunity is superior to vaccination.

The study is the latest to estimate negative vaccine effectiveness, although others have examined effectiveness against infection.

Researchers with Moderna said in a recent paper that vaccine effectiveness against infection turned negative after several months against BA.2.12.1, BA.2, BA.4, and BA.5, which are all subvariants of the Omicron coronavirus variant.

Another paper, which analyzed vaccine effectiveness against infection among children aged 5 to 11, estimated that Pfizer’s vaccine turned negative after 18 or 20 weeks, depending on whether the children had also been infected with COVID-19.

Researchers in Qatar, examining the effectiveness of the Pfizer and Moderna vaccines, estimated in June that their effectiveness turned negative over time.

And another paper, published in May by U.S. scientists, determined that the effectiveness of Pfizer’s vaccine turned negative for 12- to 15-year-olds after five months.