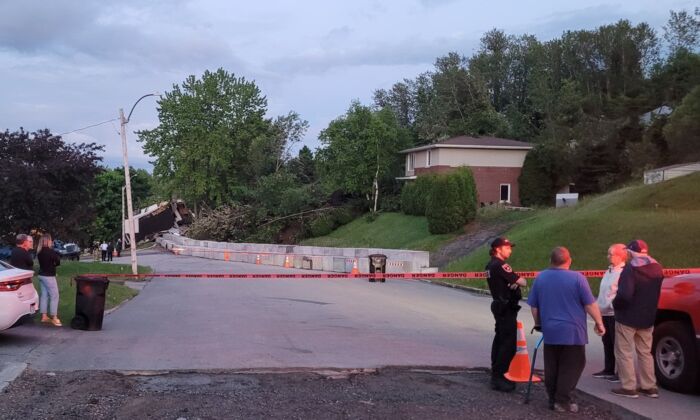 A house is destroyed in a neighbourhood of Saguenay, Que., north of Quebec City, following a landslide last week, as seen in this handout image provided June 20, 2022. (The Canadian Press/HO-Marie-Chantale Tremblay)
Canada

Another Landslide North of Quebec City ‘Inevitable,’ 187 Forced From Homes

The Quebec government was preparing Monday to extend a local state of emergency to a neighbourhood in Saguenay, Que., north of Quebec City, after almost 200 people were recently forced from their homes due to a threat of landslides.

About 187 residents had to relocate from the La Baie district after a landslide destroyed a house last week. Dominic Arseneau, a spokesperson for the city of Saguenay, said the city declared a local state of emergency Saturday night and planned to make an official request Monday evening to the province to extend it.

The evacuated area, Arseneau said in an interview, remains unstable and other landslides are “imminent and inevitable.”

“We know it’s going to happen, we just don’t know when,” he added.

Public Security Minister Geneviève Guilbault told reporters Monday she was waiting on the official request from the city before signing the state of emergency order. She said the declaration would allow Saguenay to sidestep the usual paperwork and more easily requisition property, sign contracts and redirect traffic.

“We need a good reason to declare state of emergency, but it’s rare that a municipality will ask for it if they don’t need to,” Guilbault said.

Arseneau said emergency levees have been erected in the affected part of the city to avoid any more displacement and to stop debris and mud from sliding further into the area.

Several groups have offered to shelter displaced families, most of whom had a few hours to pack their belongings and didn’t know whether they would be able to return to their homes.

Marie-Chantale Tremblay says she called her mother, 57, and stepfather, 66, slightly before 10 p.m. on Saturday after seeing on social media that people were evacuating the La Baie neighbourhood.

“My mom didn’t believe it at first, but everything happened so quickly,” Tremblay said Monday in an interview. “We tried to take as much as we could … They left their home, the memories behind.”

Contact Nature, a non-profit that owns two campgrounds in La Baie, is one of the groups that have offered to provide free accommodation to the families affected by the landslides. Its CEO, Marc-André Galbrand, says that five families, including Tremblay’s, have contacted him.

“There are no words; we are devastated like everyone else by what is happening,” Galbrand said in an interview Monday. “We will do everything we can to make the transition as easy as possible.”

Meanwhile, residents were scheduled to meet on Monday with government officials about the different types of assistance programs available to people who are searching for emergency accommodation. Each person who was forced from their home will receive $20 a day for living expenses, the public security department said.

Quebec is also offering $260,000 to those who won’t be able to return to their homes, Guilbault said.

“The city of Saguenay suffered a lot in the past,” she said about the natural disasters that have hit the city. “Right now, people are very proactive because of it, but at one point, people are fed up. We will be there; we know it’s difficult.”

Didier Perret, a research scientist with Natural Resources Canada who has been studying landslides in the Saguenay area since 1996, says the region is known for its unstable clay soil. The city, Perret added, meets a lot of the criteria for landslides.

The affected district is located on a hill with a steep incline, and recent heavy rains have made the soil particularly unstable, he said.

Hundreds of residents of Saint-Jean-Vianney, Que., also in the Saguenay region, were left without homes in May 1971, after a major landslide swept through the community, killing 31 people. In 1996, the Chicoutimi River flooded, triggering landslides and causing damage that killed at least 10 people, forcing thousands from their homes.

“Those events are still remembered,” Perret said. “When landslides happen, it brings back bad memories.”