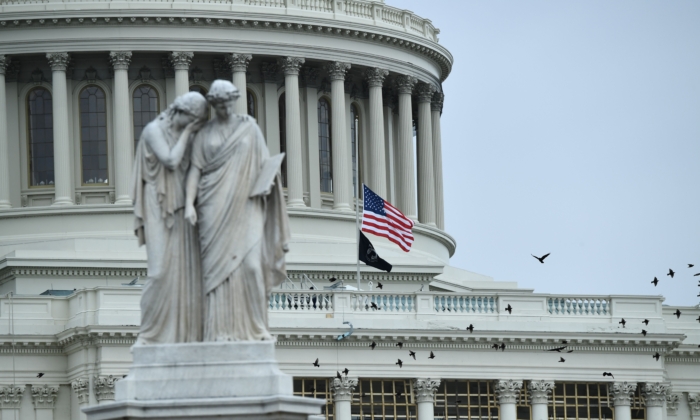 The U.S. Capitol in Washington on Jan. 8, 2021. (Brendan Smialowski/AFP via Getty Images)
US News

A second police officer has died by suicide after responding to the violence at the U.S. Capitol on Jan. 6, Acting D.C. Police Chief Robert J. Contee told members of Congress.

During his Tuesday hearing before the House Appropriations Committee, Contee revealed in his testimony (pdf) that Jeffrey Smith, who had served the Metro Police Department (MPD) for about 12 years, took his own life in the aftermath of the incident.

It was previously disclosed by the U.S. Capitol Police that Howard Liebengood, a 15-year veteran of the force, died “off-duty” on Jan. 10. Fox News and the Washington Post later confirmed that Liebengood died by suicide.

Brian Sicknick, also of the Capitol Police, died on Jan. 7 from strokes.

“We honor the service and sacrifices of Officers Brian Sicknick, Howard Liebengood, and Jeffery Smith, and offer condolences to all the grieving families,” Contee told the committee investigating the law enforcement response to what it described as a “coup attempt.”

Approximately 850 MPD officers were at the Capitol during the height of the incident, Cantee said. By the day’s end, an additional estimate of 250 had been in the area to directly support the response and aftermath.

According to Contee, law enforcement training doesn’t prepare the MPD officers for “hours of hand-to-hand combat,” which can take a toll on their physical and psychological well being. He said his department is working to help officers emotionally recover from the Jan. 6 trauma.

Yogananda Pittman, the acting chief of the Capitol Police, also appeared at the hearing. She admitted that her department was aware of the potential violence days ahead of the incident, but didn’t properly prepare for it.

“By January 4th, the Department knew that the January 6th event would not be like any of the previous protests held in 2020,” Pittman said, according to testimony obtained by the New York Times. “I believe the multiple reviews, after actions, and investigations currently underway will conclude that the Capitol’s security infrastructure must change and that the Department needs access to additional resources—both manpower and physical assets.”

Pittman reportedly told the House committee that the Capitol Police Board, a three-member panel that oversees the department, declined former Capital Police Chief Steven Sund’s request to declare a state of emergency in advance of then-President Donald Trump’s rally and bring in National Guard troops to protect the Capitol.

She said Sund again called on the Board to request support from the National Guard, but it took more than an hour for them to approve Guard intervention. Sund resigned from the position hours after the attack on Capitol.