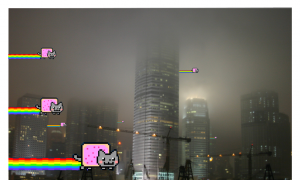 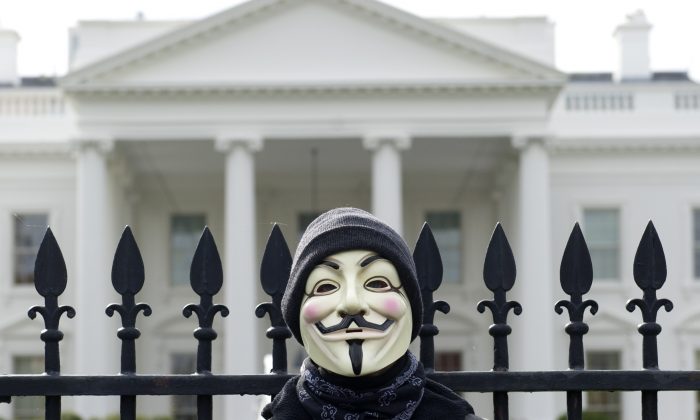 A demonstrator, including supporters of the group Anonymous, poses during a march in protest against corrupt governments and corporations in front of the White House in Washington, DC, November 5, 2013 (SAUL LOEB/AFP/Getty Images)
Canada

Anonymous, a loosely organized group of hacktivists, is threatening to leak classified information from the Canadian government unless the police officer who shot a protester is named and arrested.

Earlier this month, a knife-wielding protester wearing a Guy Fawkes mask, the uniform of Anonymous, was shot to death by police officers in Dawson Creek, British Columbia. In response, Anonymous took several websites of Canadian agencies down with DDoS attacks and has demanded that unless the officer who shot the protester is named and arrested by 5 p.m. PST on Monday, July 27, it will release sensitive, classified information that belongs to the Canadian government.

As proof of its threat, the hackers showed several documents from the Treasury Board of Canada to the National Post.

“This [Royal Canadian Mounted Police] officer must be named, fired, and charged—for the murder of our brother Anon,” an online note, which calls the campaign Operation Anon Down, reads. “And if we do not receive justice, rest assured there will be revenge.”

As proof of its threat, the hackers showed several documents from the Treasury Board of Canada to the National Post, although the Canadian government has refused to confirm or deny the authenticity of those documents.

Although Anonymous had been labeled as a hacking group, the lack of any organizational hierarchy or membership has led it to being called a collective or a subculture. The operations conducted by “Anonymous” didn’t originate from a central committee but rather from isolated hackers who decided to don themselves with the label and the mask.

Anonymous emerged as prominent online presence in 2008 with Project Chanology, a campaign, both online and off-line, that unleashed mayhem on the Church of Scientology. Since then, it’s had a string of successes—most notably the release of a key piece of evidence in the Steubenville rape trial and its take down of jihadi websites—and its fair share of duds.

Last year, the group incorrectly named the officer who had shot Michael Brown in Ferguson, Missouri. Two years before that, to bring awareness about the Stop Online Piracy Act, Anonymous threatened to shut down the entire Internet temporarily by DDoSing 13 root DNS servers, an impossible feat.

The ease with which anyone can take up the banner of Anonymous means that many of the supposed online campaigns are bound to be unfounded. In 2011, announcements of planned online attacks against Facebook, Fox News, and the Zeta drug cartel all failed to pan out.

However, evidence suggests that the group of hackers making the threats have longstanding ties with Anonymous. The YouTube account includes statements from the group stretching four years back—eons in internet years—and the latest operation has been endorsed by @YourAnonNews, the most popular Anonymous-affiliated Twitter account.

The account isn’t an official spokesperson for Anonymous by any means. Last week, it demanded that the Canadian police release the names of the officers who shot the protester, but an earlier note states that the hackers already have the name of the officer.

“To begin we will identify the RCMP officer involved, thoroughly dox him—and release that dox on the Internet. Because the world has a right to know every detail about killer cops,” an online note reads.

The name of the officer that shot the protester is still undisclosed.

This is a developing story. Please check back for more details.