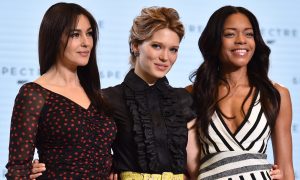 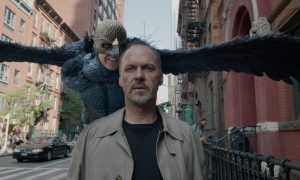 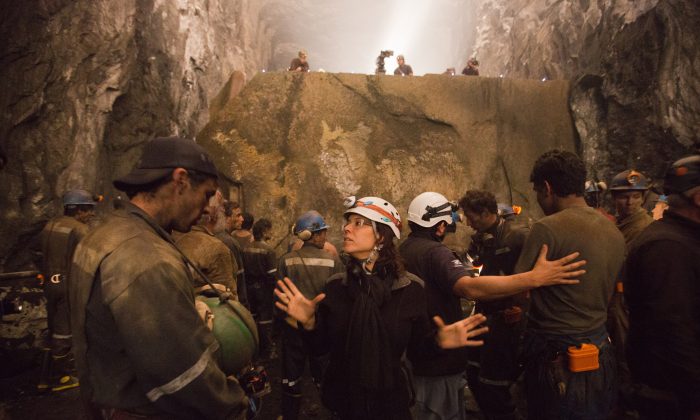 LOS ANGELES — This weekend, audiences can go deep underground with Antonio Banderas to experience the plight of the trapped Chilean miners in “The 33,” sing Christmas carols with John Goodman and Diane Keaton in “Love the Coopers,” and gawk voyeuristically at Brad Pitt and Angelina Jolie’s well-heeled depressives in “By the Sea.”

The three films couldn’t be more different — an inspirational true story, a star-studded holiday dramedy, and an art house portrait of a crumbling marriage — but they have one unique thing in common: All were directed by women.

While it might not be the only time this has happened, it certainly isn’t a regular occurrence for Hollywood, where only a fraction of directors are women.

“It’s extraordinarily rare to have three high-profile movies being released on the same weekend all directed by women,” said Paul Dergarabedian, a senior media analyst with box office tracker Rentrak. “You can bet every single weekend there are at least three films opening directed by men. That makes this notable.”

According to a study by the Sundance Institute and Women in Hollywood, women directed only 4.7 percent of studio films and 10 percent of independent films from 2009 to 2013.

The variance of this weekend is less a sign of changing times than an illustrative coincidence, highlighting the unending challenges faced by female directors in the industry to get their films financed and distributed.

“There is a lot of consciousness being raised at the moment, but the truth of the matter is that independent films are more likely to be directed by women than studio films with big budgets — unless Angelina Jolie is involved,” said Anne Thompson, founder and editor in chief of Thompson on Hollywood at Indiewire.

Jolie stands apart from the pack by nature of her celebrity status. “By the Sea,” her third narrative feature, is the only film out of the three that was acquired by a big studio before production started.

“Angelina Jolie is an example of a major movie star who has the clout to do whatever she wants,” said Thompson.

It’s not as though the other films didn’t try for the majors, but these studios just weren’t interested out of the gates. It took director Jessie Nelson nearly four years to bring “Love the Coopers” to the big screen — and that was with her wealth of experience and stars attached. CBS Films eventually came aboard to greenlight the picture.

Patricia Riggen (“Girl in Progress”) also struggled to drum up studio support for “The 33” — one of the highest profile international news stories of the last decade, and one that happens to have a happy ending.

“We couldn’t get any studios to finance it, so we became an independent movie,” she said. “Being a woman director is the hard way.”

Nelson knows this keenly. She’s been working in the industry for nearly three decades. A bad early experience with writing convinced her that she needed to learn how to direct, too. She’d sold a script conceived as a “female ‘Diner'” only to see it turned into a misogynistic joke at the hands of many male writers.

“I thought, well, if I want to write, I should teach myself how to direct so I could protect what I’ve written,” Nelson said.

Every step has been trying. Her directorial debut, “Corrina, Corrina,” took almost 11 years to make. “I Am Sam” took seven years — and Sean Penn was attached for many of those.

She noted how drastically studio filmmaking has changed since then.

“The projects that I was interested in were now made more independently,” said Nelson, who took a directing hiatus to raise her daughter. “It became about putting a project together and then going out and getting financing, as opposed to developing it at a studio.”

Riggen also had to forge her own path — producing her own projects after graduating from film school at Columbia University. Veteran producer Mike Medavoy approached her for “The 33,” which was in itself a unique experience.

“It’s still very difficult to get women financed on anything other than a family film or a romantic comedy,” said Thompson. “And the real problem for women directors is they’re not forgiven for failing.”

All three weekend releases have not been particularly well received by critics and none are likely to have the headline-grabbing success of a “Pitch Perfect 2” or a “Fifty Shades of Grey.”

“I think the box office component is important,” said Dergarabedian. “But not as important as these movies just existing in the marketplace.”