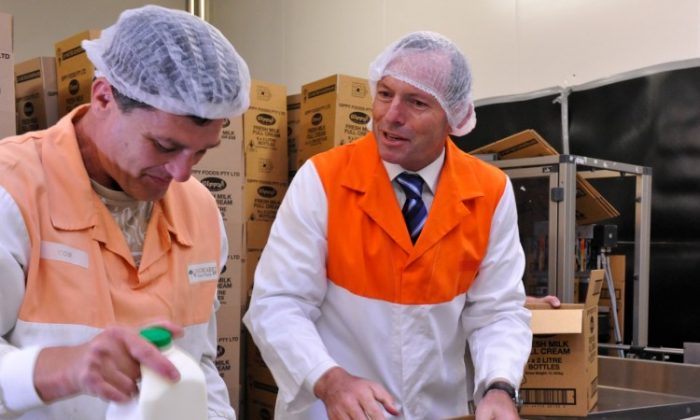 Leader of the Opposition, Tony Abbott, visits the Longwarry Food Park on March 26 in Gippsland, Victoria, Australia. Mr Abbott and other Federal and State Members are visiting towns as part of the annual Pollie Pedal ride, a charity fundraising event that will benefit Carers Australia this year. (Lucy Liu/The Epoch Times)
US

This year, the Pollie Pedal event began in Geelong, Victoria on March 25 and will finish in the capital city of Canberra on April 1.

Mr Abbott is a veteran of the very first Pollie Pedal back in 1998, when Federal and State members came up with the idea of an extended bike ride to raise money for charities.

Since then, over $2 million has been raised for a variety of causes, and in 2012 the beneficiary will be Carers Australia, the national body representing Australia’s 2.6 million carers who voluntarily look after around 4 million Australians with physical and mental disabilities.

In conversation with The Epoch Times, Mr Abbott declared the carers to be “exemplars of compassion” whose contribution to society was not always fully recognised, stressing that Pollie Pedal’s mission was “to raise awareness as well as money.”

Former cabinet minister and member for Menzies, Kevin Andrews, was also along for the ride, saying, “It’s great to meet different Australians in different places where they live.”

Mr Andrews added that another purpose of the ride was to set a good example for the community about keeping fit. “It’s important to walk or swim or run,” he said, “or do something just to keep healthy.”

“It’s tremendous to see our Opposition leader out on the road raising money for charity”, and also setting a “great example to exercise and keep fit”, Mr Hartsuyker said.

Alongside raising money for charity, the Pollie Pedal gives politicians the opportunity to mingle with the public in a more casual manner than when they are out on the campaign trail.

One stop on the biking trail was the Longwarry Food Farm, a local dairy plant, where staff were impressed to see the politicians out there raising a sweat and doing their bit for the community.

Longwarry’s Managing Director Rakesh Aggarwal explained that the business had gone through a tough time with a fire in the factory only a month ago. He proclaimed the politicians’ visit as being “very good for our staff and their motivation”.

He went on to say that, notwithstanding the setback of the fire: “Our industry is doing well. The demand for our products is quite solid all over the world and we are optimistic for the future.”

Mr Andrews praised the business for “helping farmers and increasing exports to other countries,” while Mr Abbott stated that it was remarkable how a virtually derelict site had been transformed into a modern plant.

He praised the “innovative, creative, adaptable and go ahead” attitude of Mr Aggerwal’s team and local dairy farmers, saying the dairy industry can expect a bright future in Gippsland despite setbacks in recent years.