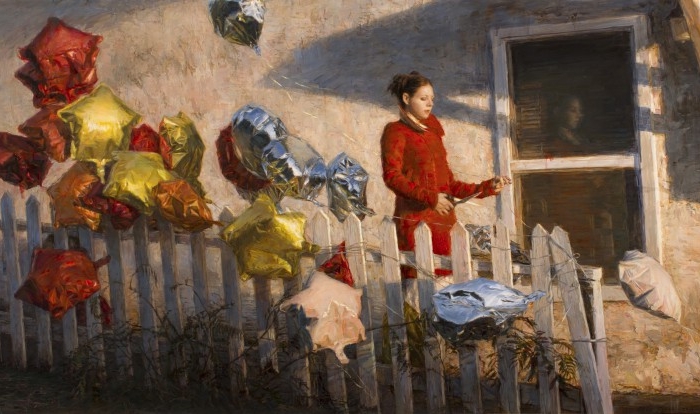 Every year the Art Renewal Center, a non-profit educational foundation dedicated to the re-appreciation of traditional art and training techniques, hosts a prestigious international painting and sculpting competition.

With an approximate 2,200 entries this year by over 1,000 artists, the Art Renewal Center’s 2013/2014 Salon Competition was more competitive than ever. This year they accepted 685 finalists, which were the top 31 percent of works submitted. They have given out 14 purchase awards, the value of the paintings totaling over $140,000. This is in addition to the over $40,000 in cash prizes.

This year it should be noted that the William Bouguereau Award Winner, “Bacchanal,” by Nick Alm, was runner up for Best in Show placing just behind Jeremy Lipking, who took the grand prize with his painting of “Adrift,” a sizable canvas of 40 by 40 inches.

“What interests me are especially our deficiencies, needs, and desires, what makes us incomplete. I see the painting as an investigation of the human psyche, rather than any kind of social commentary.”

For Lipking, “Adrift” is a continuing exploration by the artist into works inspired by the story of Ophelia. In “Adrift,” the artist depicts his own daughter floating in a transcendent state of bliss.

In addition to an $8,000 cash award the painting won an ARC Purchase award and entered the Art Renewal Center’s growing collection of works by Contemporary Realists.

In a rather last minute decision, ARC introduced a new award into the 2013/2014 ARC Salon called the Dual Category Award. This award goes to a painting or sculpture that has ranked as an honorable mention in more then one category.

This year the award has been given to Michael Dumas for his painting of “Influx: Sparrows in the Louvre,” which ranked as an honorable mention in both the Still Life Category and the Animal Category.

Dumas had the following reaction to the award:

“If I had not seen my name listed as a finalist in a previous ARC Newsflash I would have made the assumption that part of the problem with INFLUX is that it really isn’t a wildlife work, nor a true still life and consequently might very well be problematic for the judging process in either category, but…found out about the newly created category with INFLUX as the sole selection… My first ARC Salon experience has been most rewarding and with an unexpected twist which I will always remember.”

“When I Was Young,” by Stephen Bauman, won both The Fine Art Connoisseur Award as well as First Place in the Imaginative Realist Category. Since the judges for these two awards were completely separate, it says a lot about the strength of this particular image, which is both symbolic and profound.

About his work process Bauman said the following:

“My paintings can begin in very different ways. Sometimes the process is slow and arduous, filled with dozens and dozens of thumbnail sketches over the span of a year. Others seem to just fall off the brush. The commonality between them is that I like to give them, and myself, enough time to breath. To achieve this I will work on several projects simultaneously, sometimes more. My studio walls are stacked three and four deep with paintings and drawings that are in progress. This gives me enough time to meditate on the various artworks and determine if they have the natural and unaffected feeling that I am searching for.”

“When I Was Young” has been purchased by the Art Renewal Center for its growing collection.

Second place in the Imaginative Realist Category went to a German artist, Volkan Baga, for his painting of Dritte Melodie. The artist studied illustration at the University of Applied Sciences of Würzburg and has an attraction to painting symbolic works and the art of the fantastic.

The Plein Air Magazine Award went to John Pototschnik for his landscape, “Brisk Evening.” This work won him a featured article done on his work in the August/September issue of Plein Air Magazine. This award was chosen by the magazine’s publisher B. Eric Rhoads as was The Fine Art Connoisseur Award, which will also be a feature article but in Fine Art Connoisseur Magazine’s November/December issue.

All three of these awards are feature articles in their respective magazines. The American Fine Art Magazine Award of Excellence was given to Erik Koeppel, the prize for which is still to be announced.

Dominating the figurative category was Julio Reyes and his wife Candice who won first and third place, respectively—Julio Reyes first with his painting of “Vessels,” and Candice Bohannon taking third with “Bed of Gold.”

Second place in the Figurative Category went to Jeff Hein for his painting of “Cold,” a psychological study of an elderly woman.

Firma has a unique style to his work and though he paints predominantly landscape and still life, his playful and energetic compositions bring movement and life to his works. The artist will exhibit the painting, at Galerie Mokum in Amsterdam in October together with additional new works.

Aaron Harker won first place in the Still Life Category with his painting titled “The Collector.” Although this painting could have easily fit into the Animal Category, it has an interesting playfulness to both the painting and the title, which makes this piece appropriate in either category. Is the viewer looking at someone’s collection of insects and animals, which would of course include the crane; or is this the crane’s collection of edible tidbits all waiting for him in their containers, perfectly shaped for his enjoyment? The interpretation dramatically changes the tenor of the painting.

Second Place Still Life went to Katherine Stone for her work, “Israfel,” of a violin tied with fraying ribbon to an old door with chipping paint. The inspiration for Israfel came from a poem of the same name by Edgar Allan Poe. Inscribed on the door, the following verse can be seen.

“If I could dwell? – Where Israfel – ?Hath dwelt, and he where I,?- He might not sing so wildly well? – A mortal melody,? – While a bolder note than this might swell – From my lyre within the sky.

As Stone said about the painting, Israfel is an angel with an innate ability to create music and therefore is envied by mortals whose art “will always be corrupted by the imperfect instruments of man… an earthly manifestation will always be a pale echo of the original, (divine) inspiration.”

Third place went to Francois Chartier for his work “Iceberg VI,” which is of dramatically lit crumpled black and white striped tissue paper dancing on a reflective surface.

First Place in the Animal Category went to Ezra Tucker for her painting titled “Gum,” of a young moose and mother. The legs of the mother fade to expose the under drawing and the artist’s technique while simultaneously highlighting the highly finished faces.

Second Place went to “Homeland Defense,” of bees fending off a bear. The creator, Leslie Evans, has placed one of the bees in the extreme foreground, which pulls the viewer into the painting. Third place went to a photo-realistic work titled “Le Bain” by Laurence Saunois of a crane having just landed in the water. This action has tossed hundreds of water droplets into the air, all captured in this painting with extreme precision.

The Drawing Category had technically very diversified winners this year. The First Place piece is an imaginative realist work by Lawrence Williams, drawn with microscopic detail of a humanoid creature intensely studying a book.

About the work Williams said, “‘If Beauty Were a Book’ is about the freedom that reading gives you. In the old story of Beauty and the Beast it was true love that freed the prince from the curse…what if the Beast had fallen in love with literature and in that way found his own redemption.”

The second place winner, “Sketching Horses, Drawing Cats,” by Lee Teter, is of a young artist intently sketching various animals that surround her. The drawing is done in sepia and plays with atmosphere and sunlight creating an almost internal glow.

Third place went to Elena Green, a recent graduate of the Ani Academy schools, for her drawing in charcoal, “The Eye of the Day.”

First place sculpture went to Benjamin Victor for his piece, “Bathsheba,” in which he shows off his understanding of texture and three-dimensionality. The full female form can be seen through a transparent drapery that wraps around her. The work is sculpted completely out of clay, adding to the difficulty of execution and the overall grandeur.

Bathsheba is a biblical reference to the beautiful wife of Uriah who was seduced by King David. Bathsheba became pregnant with King David’s child and Uriah’s was sent to the front lines of battle and killed as a way to hide the sin. King David then married the now-widowed Bathsheba and the Lord, angered by the action, struck down their newborn as punishment.

Second place went to Gary Weisman for his contorted female form titled “Tabla Rasa” that shifts into the air at a dramatic angle, defying gravity, while third place was given to Philippe Faraut, a frequently high ranking competitor, this year for “Typoon,” depicting a mother protecting her child from the storm.

The ARC Salon continues to grow every year with greater and more diversified publicity and a continual increase in the number of artists entering. ARC is approaching the start of its 11th annual ARC Salon Competition, scheduled for 2014/2015, This is sure to be their biggest competition yet with the largest amount of cash awards and publicity to date.

Placing as a top winner will certainly give an artist his or her big break in the field. ARC will be accepting entries from October 1, 2014 through the beginning of 2015. If you are an artist, don’t miss out on your chance to compete.