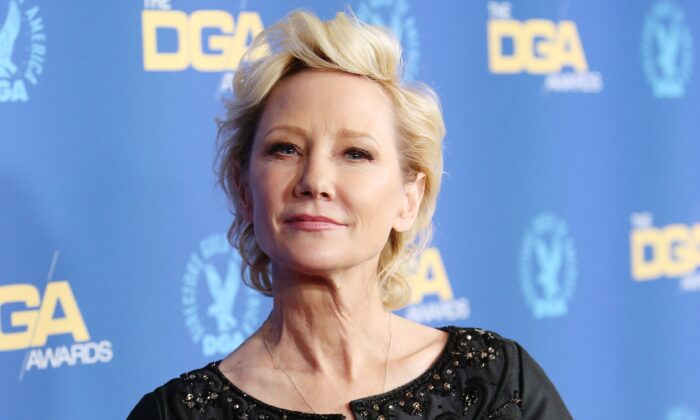 A new film starring Anne Heche about sex trafficking will still air after news that Heche is not expected to survive after a fiery car crash.

“Girl in Room 13,” remains set to premiere on Sept. 17, according to the Lifetime Movie Network, the production company that made the film.

According to Lifetime, in the film Heche plays a mother in search of her daughter who fell victim to human trafficking, and “discovers the dark world of human trafficking and the shocking statistics about its widespread victims and its unexpected accomplices.”

Heche, an Emmy Award winner, was originally scheduled to appear on the film’s panel at the Television Critics Association virtual press tour on Aug. 11, but she was hospitalized after her blue Mini Cooper smashed into a Los Angeles home on the morning of Aug. 5 and flames erupted.

During the panel on Aug. 11, Amy Winter, the Lifetime network’s executive vice president and head of programming, asked reporters to “kindly refrain from inquiring about her health status,” reported Deadline.

“As many of you know, Anne remains in critical condition and all of us here at Lifetime are deeply concerned for her and everyone affected. We hope that her friends and family stay strong during this difficult time,” Winter said on Aug. 11.

“You know, just as much as we do, that we ask that you kindly refrain from inquiring about her health status,” she added. “This project is important to Anne, along with each and every one of us. We all sought to make a film that would bring attention to this appalling issue of human sex trafficking.

“We hope that this film reached you and that you are just as inspired as Anne was to help us with our mission to stop violence against women. Thank you for your support and your questions about the film.”

During the panel, director Elisabeth Rohm confirmed that filming on the movie was completed and that it is scheduled to premiere in September. Rohm said that Heche “did a phenomenal performance” in the film.

The Los Angeles Police Department announced on Aug. 12 it had ended its investigation into Heche’s crash.

“As of today, there will be no further investigative efforts made in this case,” the department said. “Any information or records that have been requested prior to this turn of events will still be collected as they arrive as a matter of formalities and included in the overall case. When a person suspected of a crime expires, we do not present for filing consideration.”

Detectives looking into the crash had said narcotics were found in a blood sample taken from Heche.

In a statement obtained by Deadline on Aug. 11, a representative for Heche’s family said that owing to the accident, the actress “suffered a severe anoxic brain injury and remains in a coma, in critical condition.”

“It has long been her choice to donate her organs and she is being kept on life support to determine if any are viable.”

“Anne had a huge heart and touched everyone she met with her generous spirit. More than her extraordinary talent, she saw spreading kindness and joy as her life’s work—especially moving the needle for acceptance of who you love. She will be remembered for her courageous honesty and dearly missed for her light,” the statement reads.

Heche was brain dead and was on life support, pending evaluation for organ donation, before the life support was removed on Aug. 14.